Only 80.6 per cent of the Rs 6-trillion allocation has been spent by February, data from the Controller General of Accounts shows. 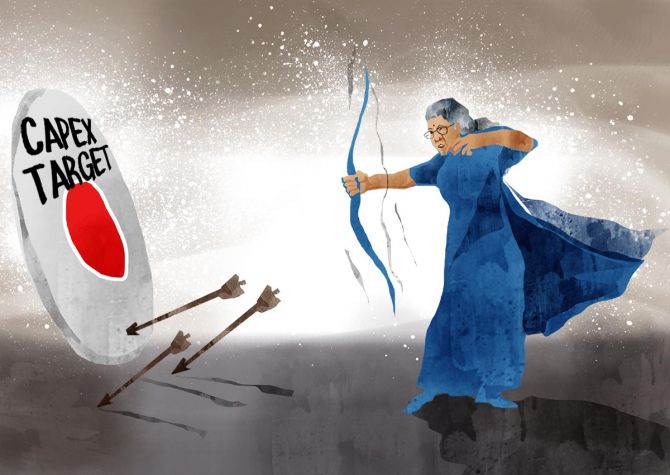 Despite the government prioritising capital expenditure (capex)-led economic recovery, the Centre is likely to have missed the capex target for the fiscal year that ended on March 31, with only 80.6 per cent of the Rs 6-trillion allocation spent by February, Controller General of Accounts data showed.

While monthly capex spending peaked to Rs 1.2 trillion in December, it has drastically fallen in subsequent months with expenditure of only Rs 43,495 crore in February.

The finance ministry has been pushing ministries and departments to meet their capex targets.

This is with the belief that higher capex by the government will crowd in private investment in the absence of strong recovery in private consumption.

Finance Minister Nirmala Sitharaman, in her FY23 Budget, raised capex by 35.4 per cent to Rs 7.5 trillion over the Budget Estimate (BE) for FY22.

This was to continue the public investment-led recovery of the pandemic-battered economy.

Realising the constraints on capex by central government ministries, Sitharaman has allocated Rs 1 trillion out of the Rs 1.2 trillion additional capex in FY23 as loan to states for capex during the year.

Speaking at an event organised by CNBC-TV18 on Friday, Sitharaman said her priority for FY23 remains meeting the Rs 7.5-trillion target for public investment in infrastructure and ensuring that states get their share of infrastructure outlay.

“I will go around the country to meet up with the industry and say one thing. In 2009, I was repeatedly asked, there is no credit in the market; there is only one engine (of the economy) in the place of four. The three other engines lay dormant. That situation improved in FY21 and people started saying probably two engines are moving and what about the other two.

“Now, I can say three engines are moving — consumption expenditure, government expenditure and exports. The last one is the only one where I expect private investments to come. Then India will move on all the engines,” she added.

“This suggests a total cushion of Rs 1.1 trillion for higher revenue expenditure, which is equivalent to the size of the third supplementary demand for grants. Overall, we expect the fiscal deficit of the Centre for FY22 to be broadly similar to the revised target of Rs 15.9 trillion,” she added.

“The increased fertiliser costs and food subsidy are likely to cost around 0.5 per cent of GDP. At this stage, a fuel excise tax cut has not been announced, but this remains a possibility. Higher nominal GDP growth, higher asset sales and lower capex spending due to execution issues could provide some offsets,” Nomura said in a research note on Friday.