‘The entire value of LIC is created by its shareholders because after the initial invest net of Rs 5 crores in 1956, the government has not given any additional capital to the LIC.’
‘If the corporation has expanded and emerged as the biggest financial institution in the country, it is only because of the policyholders.’

The biggest-ever IPO in the country is ready to happen now that the India’s largest insurance firm, the Life Insurance Corporation of India, has filed papers with SEBI.

The government plans to sell 316 million shares which is about 5% of its equity share as part of its plan to raise Rs 65,000 crores (Rs 650 billion) through divestment.

What started off on the 1st of September 1956 as the State-owned Life insurance Corporation of India when Parliament passed the Life Insurance of India Act and nationalised over 245 insurance companies and provident societies, is going to change now; after 65 years.

How will this decision affect the insurance sector in India?

“The amendment to the LIC Act is done through the Finance Act. That’s why we say that the government has played foul. They should have separated it from the Finance Bill, and brought the LIC Act separately, and allowed a national debate… They could have taken a decision after that. But you audit in the Finance Bill knowing fully well that there was no possibility of any discussion there,” Amanulla Khan, former president, All India Insurance Employees Association, tells Rediff.com‘s Shobha Warrier. The first of a two-part interview:

By selling 316 million shares, the government plans to raise Rs 65,000 crores through the biggest IPO ever. While the government is upbeat about the divestment, unions are strongly opposing it. Why?

Reason number one: The LIC was set up by a special Act of Parliament in 1956. The founding objectives of the LIC were to give protection to policy monies, mobilise small savings and invest in infrastructure development.

We feel the LIC IPO is the first step towards privatisation of the institution. By privatising, the very founding objectives are going to be undermined.

Another thing you have to remember is, the entire value of LIC is created by its shareholders because after the initial invest net of Rs 5 crores (Rs 50 million) in 1956, the government has not given any additional capital to the LIC.

If the corporation has expanded and emerged as the biggest financial institution in the country, it is only because of the policyholders.

Now, you are planning to reduce the surplus of the policyholders, and increase the share of profits to the shareholders.

You mean, by diluting 5% equity, the profits from non-participatory policies will benefit the shareholders and not policyholders?

Absolutely. 100% of the profits from non-participating policies will now go to the shareholders.

As on the 31st of March 2021, the embedded value was Rs 140,000 crores because the fund was single and not divided into participatory and non-participatory.

On the 30th of September, in a supplementary, the funds were bifurcated and the share of the shareholders was increased. Then, the embedded value increased to Rs 548,000 crores.

You can see that at the cost of the policyholders, the shareholders are going to be benefitted.

You said protection of the policyholders’ money will be affected after the IPO. In what way?

But you don’t think it will continue for a long time?

How long it can continue is a matter of conjecture.

Do you feel with this, the trust and confidence policyholders have on LIC will also be affected?

That’s why we are saying, the government is selling people’s trust in LIC, more than anything else!

The kind of work LIC has done has resulted in 29 crore (290 million) individual policyholders and 10 crore (100 milliomn) group policyholders. It means LIC has touched every household in the country.

Now, when the objective becomes maximisation of profit rather than nation building, naturally LIC also has to take up issues where profits can be generated for shareholders.

It very clearly demonstrates the reach of LIC to insure the marginalised, the weaker sections, and the lower middle income groups.

You feel these groups will get excluded soon?

If your concentration is only on profits, these groups will get marginalised.

Not only that, you start concentrating on the higher premium policies because that is from where you get more profits.

Do you think the interest in these lower income policyholders will also wane?

The interest will be there because they are also potential customers. But the concentration will be on the higher income policies.

These are certain issues the trade union movement is worried about.

Is it not moving from socialism to capitalism?

It surely is. See, the government is saying they are only divesting 5%.

And the amendment to the LIC Act is done through the Finance Act. That’s why we say that the government has played foul.

They should have separated it from the Finance Bill, and brought the LIC Act separately, and allowed a national debate. They should have referred it to a parliamentary committee, then the pros and cons would have been discussed. They could have taken a decision after that.

So, all the amendments to the LIC Act were brought through the Finance Bill.

At present, it is said that LIC sells three out of four policies in the country. What will happen to LIC and its target group after this?

The aim of LIC is to increase the number of people who are insured irrespective of their capacity to have a higher premium. That’s why LIC has been insuring lower income people.

Now, you will have to compete and generate profit for the shareholders. 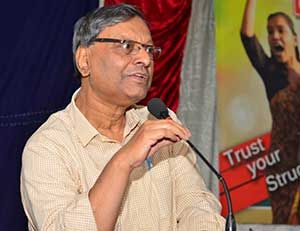 You think LIC will discard its initial objective, and become one among the many other private insurance companies?

Absolutely. It will also have a very big impact on the agency force. The biggest asset of LIC is its agency force of 13 lakh (1.3 million) people as even today 82% of the business comes through agents.

If you compare this with the private sector, 65% of their business comes through bank assurances as most of these private companies are promoted by banks and they have their captive customers.

On the other hand, our agents will have to go to the field and get business.

Don’t you think this can lead to job losses too?

There is a possibility though it is too early to predict that.

When LIC has to compete with the others by increasing our partnership with banks and various other intermediaries, naturally this will have an impact on our agency force.