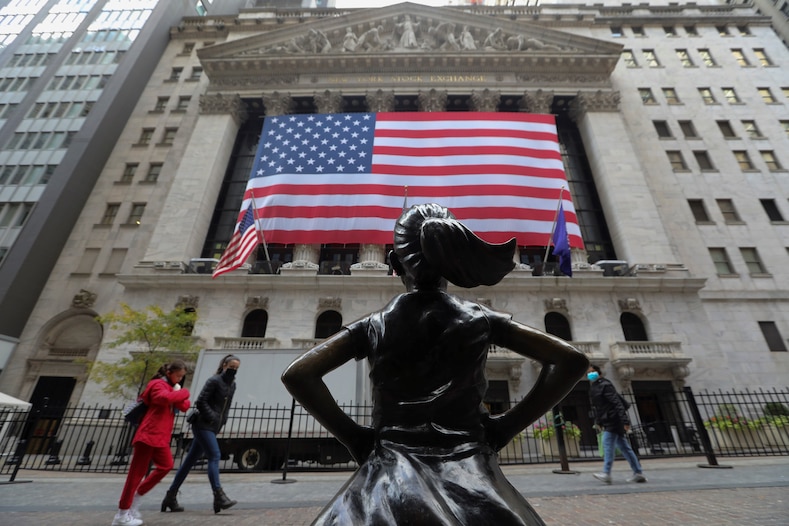 Global shares rose on Monday, helped in part by a surprisingly big improvement in Chinese economic data and as investors pared back some of last week’s bearish positions, despite another national lockdown in England and the growing nervousness over Tuesday’s US election.

Futures on the S&P 500, Dow Jones and Nasdaq 100 rose between 0.3 and 0.5%, pointing to a stronger start to trade after the opening bell on Wall Street later. On Friday, the S&P closed with its steepest weekly drop since mid-March, pummeled by an investor exodus from risk-linked assets such as stocks and commodities.

China’s factory sector saw activity expand at its fastest pace in almost 10 yearsin October, thanks to a surge in domestic demand, although the spike in cases of COVID-19 in some of its biggest customer nations in Europe curbed exports.

In Europe, the Stoxx 600 rose 1%, boosted by an 8% rise in shares of British online grocer Ocado, which said it would buy two robotics firms. The company, which has only a fraction of the UK groceries market, is its most valuable, thanks to the surge in online shopping in the face of lockdown restrictions.

Among the regional indices, the mood was upbeat, with Amsterdam’s AEX and Vienna’s ATX benchmarks up 0.7%, along with London’s FTSE 100, which profited from a 0.5% drop in the value of the pound, as investors in UK markets prepared for another lockdown across England this week.

“Clearly the US elections this week are likely to be a pivotal driver for equities. We have shown  in  recent  work  that  European  equities  are  one  of  the  regions  most  exposed  to  the improvement in the polls for Biden,” UBS equity strategist Nick Nelson said in a note.

Read More: An unusual wrinkle in Wall Street’s fear gauge is warning that the upcoming election could trigger a prolonged period of stock-market chaos – one that’s much worse than the aftermath of 2016

Conservative prime minister Boris Johnson is expected to seek approval from the British parliament for a one-month lockdown to come into effect on Thursday across the whole of England, which is home to nearly 90% of the entire UK population, to curb an alarming spike in cases of COVID-19, which he said on Saturday was more severe than the government’s reasonable worst-case scenario.

The pound fell 0.4% against the dollar and the euro, making it the worst-performing G7 currency of the day.

“On the growth outlook, a fourth-quarter contraction is now probable. November GDP will likely plunge by 6% to 10% m-o-m, as a result of tighter restrictions,” Deutsche Bank analyst Sanjay Raja said.

The UK has the worst death rate in Europe, with nearly 45,000 fatalities so far. The eurozone has seen large swathes of the population put under renewed restrictions, including France, Germany and Spain and economists are predicting a drastic decline in overall activity.

UBS has cut its annualized growth forecast for the eurozone to 3% from 8% for the fourth quarter of the year.

Oil has fallen to its weakest in five months, as mobility restrictions have increased across much of Europe, which is biggest driver of demand for diesel fuel.

Production of oil outside of the Organization of the Petroleum Exporting Countries is rising. Output from Norway’s largest oilfield is set to reach a record high of nearly 500,000 barrels per day soon, while production in Russia and the United States is edging higher, along with Libyan oil output, which has doubled in recent weeks, thanks to the cessation of violence between warring factions.

“Right now, there is a lot of immediate pain in the oil market with rising supply from Libya, weakening demand in Europe due to C-19 lock-downs and muted orders for crude from tea-pot refineries in China,” SEB analyst Bjarne Schieldrop said. “All with US election worries on top. In terms of a potential Biden-win and the bearish impacts from that we think that it is all more than price into the market.”

Read More: Buy these 13 stocks that are set to crush expectations and rally after their earnings, Jefferies says – including a top pick that could surge 79%