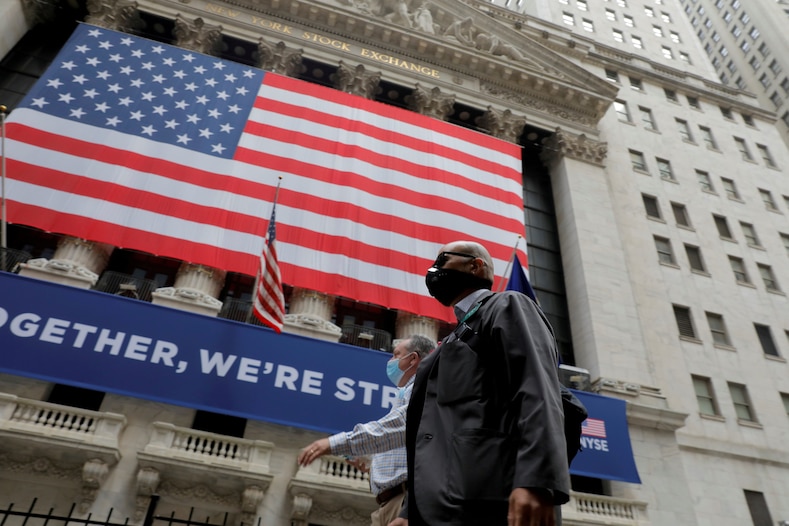 Global equity indices fell on Tuesday, as investors booked profits on the vaccine-inspired rally to record highs following drugmaker Moderna’s announcement the day before on the effectiveness of its rival offering to that of Pfizer.

A raft of restrictions on movement across the United States to help stem the spread of the virus that has already infected over 11 million people and killed more than a quarter of a million neutralized some of the euphoria that lifted markets this week.

Futures on the S&P 500 and the Dow Jones were down between 0.3-0.4%, while the Nasdaq 100 diverged, rising 0.3%, as some of the technology stocks that were sold down fairly heavily on Monday recovered some ground.

The Dow Jones posted the first record close since February on Monday after Moderna said its vaccine candidate had proven to be 94.5% effective in clinical trials and, crucially, was easier to transport and store than rival Pfizer’s vaccine.

Read More: Barclays details its ultimate strategy for picking stay-at-home market winners for a post-COVID world – and shares 2 stocks all investors should own before the recovery accelerates

“The fact that there is now light at the end of the Covid tunnel and an exit strategy from this health crisis and economic crisis has given investors plenty to cheer. However, it is also impossible to ignore the current covid backdrop. Sharply rising cases, tightening lockdown restrictions could quickly knock the fragile economic recovery off course well before the vaccine is being widely distributed,” she said.

In Europe, the Stoxx 600 eased by 0.1%, as declines across the so-called “real economy” sectors, such as banks, construction stocks and energy companies weighed on some of the regional indices.

Shares in electric carmaker Tesla rose by around 11 in premarket trading, after a decision on Monday by S&P Global to include the stock in the S&P 500 from December.

Beyond the stock market, the dollar index fell by 0.2%, reflecting gains in the pound and the euro, which rose 0.2 and 0.1%, respectively. Against the offshore yuan, the dollar fell 0.2%, while against the Mexican peso, it rose 0.6%.

Yields on the benchmark 10-year Treasury were steady around 0.90%, around their highest since March, reflecting the investor push out of safe-havens that has sent gold to its lowest since July this month.

In the commodity markets, gold traded roughly flat on the day, around $1,887.75 an ounce. The price has fallen by around 1% so far this month, in light of the progress towards an effective COVID-19 vaccine.

Read More: JPMorgan shares 35 European stocks across 10 sectors that you need to own in the rotation to value – including one that could see EPS growth of almost 700% next year