As the Welsh government was setting out a grim set of Covid-19 statistics and explaining why new restrictions in the hospitality and entertainment sectors across Wales are needed, tens of thousands of people had flocked to Cardiff’s Queen Street to grab Black Friday bargains and stock up on Christmas gifts.

“We’re about halfway through our shopping,” said Adelheid Howells as she and daughters, Emily, Megan and Summer caught their breath, guarding an impressive collection of carrier bags.

The family had driven from Merthyr Tydfil into Cardiff. “This was the only time everyone was off at the same time so we thought we’d come and take advantage,” said Howells. “It feels safe. We’re being careful.”

The biggest queue by far was for Primark. Marshalls in high-vis jackets and masks kept a snaking line in order. Jessica Ceo, 27, from Pontypridd, said she was doing almost all her Christmas shopping online but as Primark does not have an online shop, a personal visit was the only way. “The atmosphere is quite good, actually, I don’t mind queuing,” she said.

From early in the morning queues formed outside Zara, JD Sports and Lush. City council safety stewards were on hand to help shop staff urge shoppers to stay two metres apart as they waited.

Trying to strike a balance between keeping the shopping streets safe and not appearing too heavy handed, the council has also hired a bunch of actors who would have been appearing in pantomimes at this time of year to form an “elf and safety” squad. 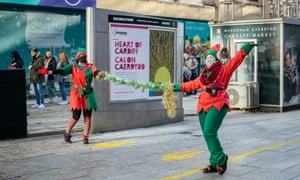 Armed with a length of tinsel exactly 2m long, they patrolled the city centre encouraging shoppers to keep their distance – and keep their masks on.

Their job description, however, did not include rooting out English invaders. Residents of England, where non-essential shops remain closed – are not currently allowed to travel to Wales to shop.

Inevitably some did. One woman, who declined to give her name, said she had come to Cardiff from Bristol for work – which is allowed. “But I couldn’t resist popping into one or two shops,” she said.

South Wales police has said it is determined to clamp down on such rule-breakers across this weekend.

Officers have been granted additional powers to conduct random vehicle checks to ensure those who are visiting the city are not breaking regulations.

Those found to be in breach of coronavirus legislation face being fined and given a direction to leave the city and return home.

Cardiff and Vale of Glamorgan Superintendent Jason Rees said: “The past few months have been difficult for us all, and with the rules having relaxed slightly, non-essential business reopening and Christmas just around the corner, it’s understandable that people will want to get out and about and enjoy all our city has to offer.

“We are anticipating another busy weekend in our city centre, and while we will continue to adopt the policing style we have throughout the pandemic – working with the public to encourage voluntary compliance – we are committed to enforcing where blatant and flagrant breaches occur.”

The leader of Cardiff council, Huw Thomas, said he was keen for the shops to have a chance to turn a profit while not forgetting that people needed to stay safe. “We’re asking people to plan, know where they are going and advising them to wear masks even when they are outside,” he said.

At The Welsh Shop opposite Cardiff Castle, father and daughter team Bob Rice and Charlotte Rice-Ward, were staging the first Black Friday sale in the shop’s 40-year history. “We’ll probably keep it going until Christmas now. Every bit helps.”

Friends Jane Urquhart, 73, and Carol Hall, 60, from Cardiff, were watching the shopping frenzy with raised eyebrows. They had come into the city early, headed to HMV to pick up some cut-price DVDs and to Marks & Spencer for pumpkin spice. “We’re done now. We’re heading home out of this madness,” said Urquhart. 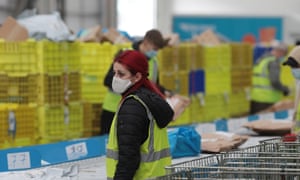 Mid-morning on Black Friday, and the Hemel Hempstead depot for parcel delivery company Hermes is already a flurry of activity – and it’s only set to get busier.

Teams of workers stand spaced out along conveyor belts – wearing face masks, hi-vis vests and hooded jumpers or hats to ward off the cold. They are busily sorting parcels inside the enormous warehouse, which is 78,000 square foot (7,246 square metres), or the size of 11 football pitches.

Overnight, employees processed a record 13,000 parcels per hour, 1,000 more than usual, from retailers including Next, John Lewis and Asos, destined for consumers in London and the Midlands.

For several years, deep discounts from retailers have made this the biggest online shopping day of the year. But after months of surging internet sales during the pandemic, online sales are expected to reach new highs.

Hermes said early indications showed this year’s Black Friday would be a record-breaker for them, with its network processing more than 3.1m parcels during the day.

These levels are 50% higher than last year’s festive peak, when Hermes processed around 2m parcels in one day.

“I’m not scared of the work,” he said, “I’m happy to have the work, as the time goes quicker.”

On the chilly depot floor, with pop music blaring in the background, a worker in a Santa hat is helping to unload a trailer full of parcels which has arrived from one of Hermes’ six national sorting hubs. 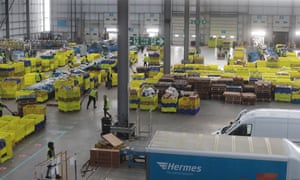 Parcels of different sizes, from cardboard boxes containing bicycles, to packages with items of clothing or Christmas decorations, are unloaded by hand, put on a conveyor belt, before being scanned and stacked into plastic pallets, ready to be driven to smaller, local delivery units.

The depot usually employs just shy of 150 people, but numbers swell in November and December by the addition of around 80 temporary workers.

Lockdowns and the closure of non-essential shops have resulted in a testing year for retailers, many of who were struggling even before the pandemic began.

In a bid to lure shoppers online, many retailers launched their Black Friday offers earlier than usual, resulting in ever greater numbers of parcels arriving at Hermes’ sorting hubs from the middle of November.

“Historically, Black Friday has been the retailers’ day on the high street, and we used to see it in the network after Cyber Monday,” said Lauren Fletcher, head of depots – south at Hermes.

“We have hit higher numbers slightly earlier, and we’re anticipating an increased period of activity, rather than spikes within the peak period,” she said.

Hermes, the UK’s second-biggest parcel firm after Royal Mail, announced earlier in the year it was ploughing £30m into expanding its operations to meet soaring demand for online shopping during the pandemic, and was creating more than 10,000 jobs, the majority of them parcel couriers.