Employees at Ford India’s Chennai unit have called off the strike that started on May 30. 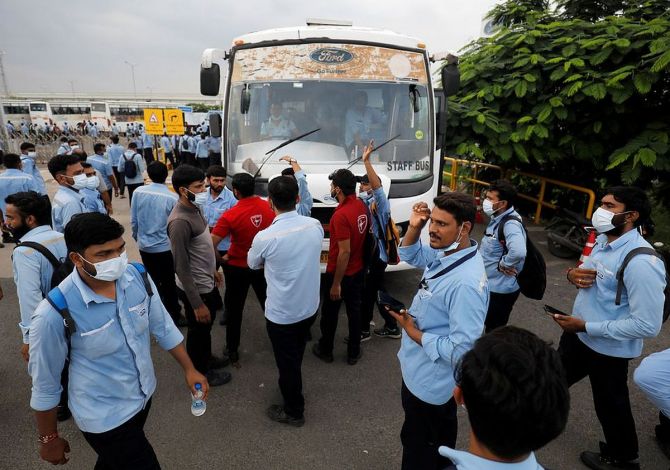 Following this, the company has revised its severance package from earlier 115 days to 121 days for employees supporting production.

The company indicated it would continue ‘constructive discussions’ with the unions in order to sweeten the deal further, if required.

A union official told Business Standard that the strike had been called off temporarily and that the union will take a final call on whether or not to continue with it after talks with the management.

Employees also said the spike rise in Covid cases in the state prompted them to change their minds.

The company had announced the extension of the production schedule till the end of July. As part of the earlier package, employees were offered 115 days of gross wages for each completed year of service.

The cumulative amount to be given was set at a minimum of Rs 30 lakh and capped at Rs 80 Lakh.

The firm had said last September that it was shutting its factories in India.

“The company remains committed to achieving a fair and balanced outcome on the severance package and has requested the unions to engage in a dialogue without any preconditions. Unreasonable demands and ongoing disruptions have proved to be an impediment and not in anyone’s interest,” said a company source.

The firm has also increased the equivalent average days in the severance package offer from 115 days earlier, to 121 days for employees supporting production, he added.

Ford India had earlier said it would protect the wages and employment of those reporting to work or supporting production until July 2022.

The company said it is looking forward to a constructive discussion with union office bearers to ensure a severance package settlement for all employees by July 31 and that it remains grateful to the Tamil Nadu Government Labour Office for its continued guidance and support.

The package that the company had offered included an ex-gratia amount equivalent to 87 days of last drawn gross wages (May 2022) and a fixed amount Rs 50,000, both for every completed year of service.

Besides, benefits equivalent to a lumpsum amount of Rs 2,40,000 and continuation of current medical insurance until March 2024 were offered.