ExxonMobil has swung to a loss for the first quarter after a writedown of almost $3bn on the value of its oil reserves because of a collapse in US oil prices.

The US oil company reported a loss of $610m for the first quarter of the year following the outbreak of coronavirus, compared to a profit of $2.4bn in the same months last year.

The financial slump includes a $2.9bn writedown to the value of its oil reserves after oil prices tumbled by more than 70% this year due to the sudden drop in demand for oil and transport fuels as major economies impose Covid-19 lockdowns.

In the US, oil prices turned negative for the first time owing to a catastrophic oversupply of oil that risks overwhelming traditional oil storage facilities and has forced traders to turn to empty crude tankers, rail freight containers and salt caverns to store the unwanted crude. 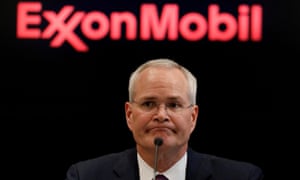 The price of US oil, known as West Texas Intermediate (WTI), climbed to around $20 a barrel on Friday ahead of planned production cuts from the world’s largest oil producers which are due to begin this month.

The global oil price, Brent crude, rose to more than $26 a barrel.

Chevron, the second largest oil company in the US, said it would rein in its annual spending plans by a further $2bn this year to $14bn, down sharply from its original $20bn spending budget, in order to safeguard the company’s shareholder dividends.

Royal Dutch Shell became one of the first major oil companies to cut its shareholder payouts for this year by slashing its dividend by two-thirds. The company’s chief executive, Ben van Beurden, said Shell would reduce the dividend for the first time since the second world war because it was “prudent” in the current environment.

Exxon, Chevron and BP have all held their dividend in place for this quarter. Analysts expect the impact of the global oil market downturn on oil companies to be more severe in the second-quarter results.