The week ended October 17 was remarkable as it saw a fall in the unemployment rate.
We have not seen such a level in any monthly estimate of the employment rate since March 2020, Mahesh Vyas points out. 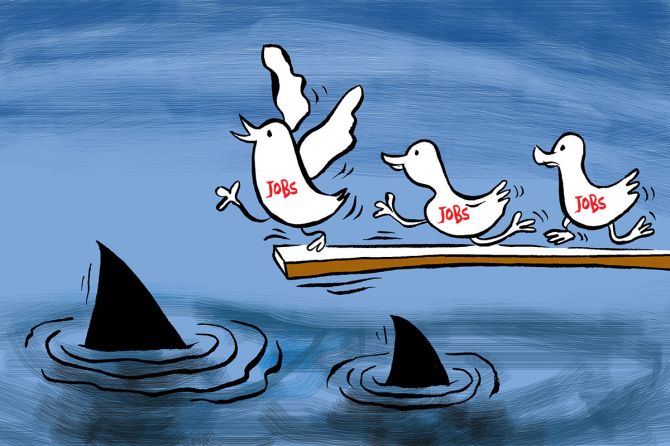 Recent history tells us that gains in employment made in a month are easily wiped out in subsequent months and the net gain over a few months turns out to be negligible.

If such a trend were to continue, a significant part of the jobs created in September could just come unstuck in October.

However, there seem to be good enough reasons to believe that October would also see an expansion in employment.

Of course, there is still some catch-up to do to match the employment India provided in 2019-2020.

Firstly, the September spurt was not a growth in agricultural employment implying that unlike in the recent past this was not merely disguised unemployment.

Secondly, although the increase in employment in September was disproportionately higher in rural India, it was also palpable in urban regions where nearly 2 million jobs were added.

This makes the growth in employment more widespread and, therefore, sustainable.

Finally, the increase in employment in construction and food industries seen in September is likely to be more sustainable than the gains seen in August which were essentially in personal non-professional services (which are largely poor quality jobs) and retail trade (which could not be sustained in September). The unemployment rate has remained elevated in the first half of October 2021. But, this is not a cause of much concern because the other two ratios are doing very well.

This was the highest LPR level in a year. But, the end of September and early October gave a minor scare.

The week of October 3 was an exception to a trend that suggests that the LPR is rising.

If this trend continues, and it is unlikely that it would, then the LPR is likely to be comparable or higher than the 40.7 per cent pencilled in September.

It may be fair to assume that the LPR will rise in response to the current festival season and also because of the proximity to the harvest season.

The week ended October 17 was remarkable as it saw an increase in the LPR and a simultaneous fall in the unemployment rate.

An ER of 38.5 per cent is impressive compared to levels seen recently.

We have not seen such a level in any monthly estimate of the ER since March 2020. In the past year, such a level was breached only twice in weekly estimates.

The spurt in the LPR and the ER give additional reasons to expect October to see a consolidation of employment gains seen in September, or even a small expansion.

The week ended October 17 reported better ER than in the month of September in both rural and urban regions. The story is better in urban India.

In urban regions, the ER was 35 per cent in the week ended October 17 compared to 34.8 per cent in September.

More impressively, the 30-day moving average of the ER in urban India as of October 17, at 34.7 per cent, was higher than the September ER of 34.6 per cent.

Even the 30-day moving average unemployment rate at 7.9 per cent in urban India was lower than it was in the month of September when it was at 8.6 per cent.

The rural employment rate during September was 39.5 per cent.

The coming harvest season could improve this towards the end of October.

Given this recent rise in the ER and prospects of its further consolidation, it is likely that employment could expand marginally in October.