London (CNN Business)The $4 billion takeover of US ticketing resale platform StubHub by its European rival Viagogo was thrown into jeopardy on Thursday after Britain’s competition watchdog said it could require the companies to part ways.

The Competition and Markets Authority (CMA) said in a statement that the deal is “likely to result in a substantial lessening of competition in the online secondary ticketing market,” increasing fees for customers and reducing innovation.
Viagogo bought StubHub from eBay (EBAY) in February for $4.05 billion in cash, just weeks before the coronavirus pandemic forced the cancellation of sporting events and concerts around the world. Major events continue to be forced online, canceled or postponed and many live sporting events are still being played behind closed doors. 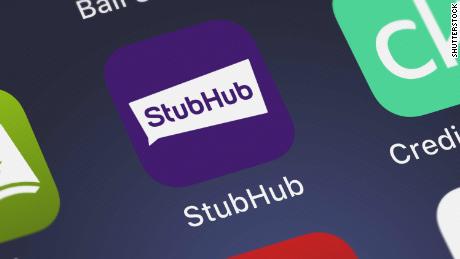 While the CMA recognized the impact of the pandemic on the live events industry, it said the companies will remain “important competitors for the foreseeable future without the merger.” The regulator said it could require Viagogo to sell all or part of StubHub to address its concerns and has invited comment on its provisional findings by November 12.
“The evidence we’ve seen so far consistently points in the same direction — that Viagogo and StubHub have a market share of more than 90% combined and compete closely with each other,” said Stuart McIntosh, who led the CMA’s in-depth investigation into the deal.

The inquiry examined the extent to which resellers use both companies’ platforms, the fees charged for resold tickets and the companies’ internal documents. “We are concerned that their merger could lead to secondary ticketing customers facing higher fees and lower quality services,” McIntosh added.
StubHub and Viagogo said they would keep their operations separate during the CMA review, but both companies seem confident that the deal will go ahead.
“Whilst we disagree with the provisional conclusion that the deal would reduce competition, we look forward to working with the CMA to deliver a comprehensive solution which addresses their concerns,” a Viagogo spokesperson told CNN Business.
“We look forward to the day when the companies can combine to provide consumers wider access to their favorite events,” said a spokesperson for StubHub.
EBay bought StubHub for $310 million in 2007. The website sells tickets for a variety of events, including sports and concerts. EBay announced plans to sell the business in November, as part of a broader strategic review, which also resulted in the sale of its classified ads division to Norway’s Adevinta for $9.2 billion.

Viagogo is a Switzerland-based company that also resells tickets, mostly for sporting events including European football, rugby and cricket. During the FIFA World Cup in 2018, the governing body of the soccer tournament filed a criminal complaint against the company from consumers and watchdog groups about “opaque and deceptive business conduct.”
— Jordan Valinsky contributed reporting.
Source: Read Full Article

Related News:
Business News:
Economists see first signs in data that vaccine is working
When it comes to salary, India Inc has its job cut out
A $15 federal minimum wage would give 19 million women a raise — but it might not happen anytime soon
One giant question is swirling around the IPO of hot health insurer Oscar: Can the startup ever make money?
Cash hope for victims of £4m con man – The Crusader EXCLUSIVE
Recent Posts