Tele/video-consults have been effective for patients requiring post-hospitalisation follow-up, especially if they are from outside the city; patients with chronic diseases that need periodic monitoring; and pregnant women who require routine checkup with minimum exposure. 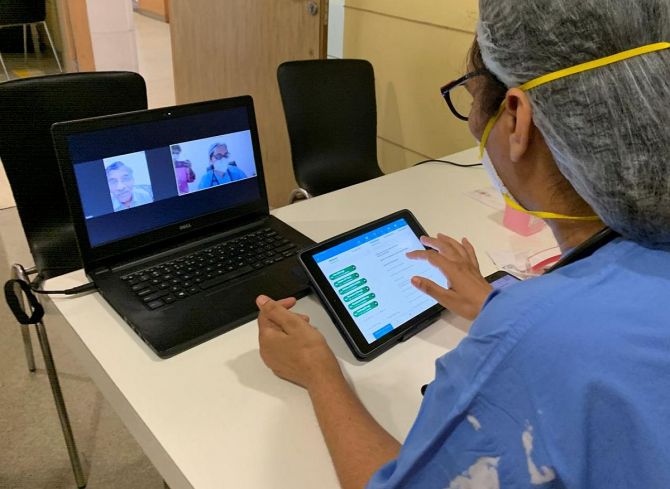 Vidyun Sahay, a Delhi-based techie, developed a severe eye infection during the lockdown.

Not keen on visiting his ophthalmologist in the time of Covid-19, he called the doctor on phone.

The consultation took place on a WhatsApp video call with the doctor later sending him a picture of the prescription.

Sahay paid for the consult online.

With people wary of going to hospital, and hospitals themselves stretched, online health consultation, or telemedicine, has gained currency in India in the last few months.

Online portal Practo says its teleconsultation increased by 500 per cent between March 1 and May 31, 2020, and about 50 million Indians accessed healthcare online, with an average frequency of two online doctor consultations per month, per user.

Apollo Hospitals, too, has registered a nearly threefold increase in telemedicine since March.

The hospital chain expects that 40 per cent of its OPD consultations will move to the virtual platform within the next three years.

And Manipal Group says already 12-15 per cent of its consultations happen through the telehealth route.

Shobana Kamineni, executive vice-chairperson, Apollo Hospitals Enterprise, says the group launched tele-consults two decades ago but both doctors and patients were hesitant because of lack of clear processes and laws against possible malpractices.

While the hospital’s business dropped by around 10 per cent, the Apollo 24’7 business is growing at 14 per cent week by week, Kamineni says.

Meanwhile, the Union health ministry’s national telemedicine service too is providing around 5,000 consultations every day.

The service operates via two platforms: “eSanjeevani” at the Ayushman Bharat Health and Wellness Centres and “eSanjeevaniOPD” for patient-to-doctor consultations.

The consultations are available across 40 departments, which include gynaecology, psychiatry, dermatology, ENT, ophthalmology, antiretroviral therapy for AIDS/HIV patients and for non-communicable disease.

While there is an acute shortage of medical professionals – India has one doctor for every 1,445 people as against WHO’s prescribed norm of one doctor for 1,000 people – the country faces a huge burden of patients suffering from non-communicable diseases who need to be treated without delay, says Ashutosh Raghuvanshi, MD and CEO, Fortis Healthcare.

Tele/video-consults have been effective for patients requiring post-hospitalisation follow-up, especially if they are from outside the city; patients with chronic diseases that need periodic monitoring; and pregnant women who require routine checkup with minimum exposure.

“The growth of telemedicine will allow access to good and affordable care to Tier I and II cities and reduce the load on secondary and tertiary care hospitals,” Raghuvanshi adds.

While the technology for telemedicine and video consults has existed for many years now, the pandemic has necessitated the need for a suitable regulatory framework around it, says Ranjan Pai, chairman, Manipal Group.

A lot of work remains to be done to familiarise people with this service and build confidence in its efficacy.

Its potential to create access to quality clinical advice for underserved areas is immense.

This is especially true in India, where much of the infrastructure and clinical talent is concentrated in a few cities.

Data security will be of utmost importance and will need to be ensured.

Chennai-based Cyber security Vittal Raj says during the Covid crisis, hospitals and health care entities have been amongst the preferred targets of hackers.

“Health data of a diverse country such as ours is always in hot demand for drug trials and related research and innovation,” Raj says.

“So there is high potential for illegal trading of such data using covert digital channels.

“India is yet to get its laws and standards that stipulate compliance for protecting patient health information.”