Some British Airways staff were volunteering in hospitals serving drinks to NHS nurses; about half were furloughed on coronavirus lockdown; a scant few were actually operating flights when a life-changing email was sent their way.

One pilot, on unpaid leave, was having tea at home when his daughter burst in, upset, to relay news reports that 12,000 BA staff faced the sack – more than one in four of the workforce. Only a little later did the message arrive from the airline’s chief executive, Alex Cruz, confirming “possible reductions in headcount”.

Although ominous warnings about aviation’s biblical losses and bankrupt airlines had been ringing out for weeks, the announcement to the stock exchange by BA’s parent company, International Airlines Group (IAG), still came as a shock. Until that moment the biggest, most profitable carriers, had made only smaller cuts, furloughing staff and reducing fleet orders. 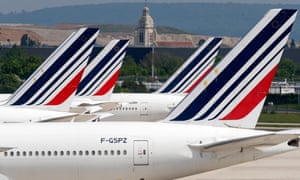 And around Europe, governments were rushing to guarantee the survival of their flag carriers, with billions of state aid. As Air France and KLM sealed a €10bn package between them, and German ministers pledged to back Lufthansa, Cruz told his staff that there was “no government bailout standing by for BA”. But why?

A refrain echoed by several past and present employees is that BA was “never an airline to let a crisis go to waste”. The situation was, as Cruz headlined a previous all-staff memo in March, a matter of survival. But, if convincing the government to resist bailing out all airlines meant BA could ultimately survive a crisis that might fatally wound its nemesis, Virgin Atlantic, and let it force through unwelcome changes on its own unionised workforce – for BA bosses, recovery would be sweet indeed.

Despite Cruz’s blunt words on state aid, the decision was a matter for owners IAG, which also owns Iberia, Vueling and Aer Lingus. So far it has remained tight-lipped – but on Friday it accepted a €1bn loan backed by the Spanish government, just three days after the BA redundancies were announced. 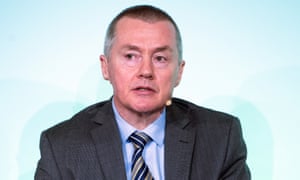 IAG’s chief executive, Willie Walsh, has long set out his stall against handouts in the UK. In January, when most carriers were still regarding coronavirus as a blip that might impact long-haul routes to China, the future of one regional carrier, Flybe, was deemed significant enough for government intervention. But as ministers looked set to offer assistance, IAG cried foul. Flybe was owned by a consortium led by Virgin Atlantic, BA’s old rival, which had grand visions of the doomed airline being its own domestic feeder network as it became a “second flag carrier” at Heathrow.

Later, when the full extent of the coronavirus crisis hit, and airlines led by Virgin called for a bailout for the beleaguered sector, IAG was quick to distance itself. Walsh said they were having “no dialogue with any governments” for handouts, adding: “I think governments would expect airlines to look at self-help before they would call on governments to provide state aid.”

They did, however, “avail of general facilities” offered in Rishi Sunak’s economic stimulus: about 22,000 BA staff were furloughed, worth up to £110m.

Meanwhile, in a sealed IAG office inside BA’s Waterside HQ near Heathrow, a team of around 80, largely the bean counters of the group, set to work on emergency plans that would revive a long-held vision on how to slash BA’s costs.

What emerged later on Tuesday night in an email to unions was a proposal of not just job losses but vastly reduced terms and conditions for long-serving pilots, cabin crew and ground staff.

Far from cushioning those made redundant, or incentivising voluntary redundancy, the airline said it could now afford to only pay the bare statutory minimum. 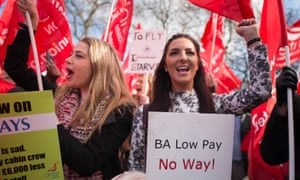 Unite denounced it as “unlawful and immoral”; other employees described it as “a bloodbath” and “being thrown to the wolves”.

Staff that keep their jobs will be forced onto the inferior contracts offered to new entrants since 2010. All cabin crew will now be part of the lower-paid “mixed fleet” – set up during bitter strikes over cuts to terms and conditions that Walsh hoped to impose when he first joined BA. Long-serving ground staff at Heathrow face similar moves.

For unions, there is little doubt what they see. Unite’s national officer for aviation, Oliver Richardson said BA was “carrying out a brutal act of smash and grab opportunism … simply designed to boost their profits in the future and to try to force other operators out of the UK aviation sector.”

Andrew Lobbenberg, an analyst at HSBC, however, says airlines are now not expecting stability for two to three years. “You could say they are securing the future of the business. Clearly people whose terms and conditions are being re-based will argue they are making changes under the cover of the crisis – but you can view it both ways.”

IAG is a Spanish-based, multinational group, possibly complicating requests for BA, and any state aid might come with constraints unwelcome to shareholders – and IAG’s biggest shareholder is Qatar’s sovereign wealth fund, which grew its stake to 25% in February.

However, some in the City and at BA believe that the airline might yet change its tune on state aid once Virgin is either bailed out – or no longer exists.

Nonetheless, some carriers expecting state aid are taking decisions that Lobbenberg says would “be challenging for labour or governments”, such as Lufthansa closing its no-frills operation Germanwings.

With the entire sector in such upheaval and no clear, imminent route back to mass travel, it is hard to see what kind of industry, let alone BA, will emerge.

Yet few believe BA would abandon Gatwick, or give up valuable Heathrow slots – and losing a quarter of the workforce may not mean shrinking operations by the same amount.

Iberia pilots were forced into “productivity improvements” of 20% more hours when they were “restructured” after joining IAG in the wake of the financial crisis. As Lobbenberg points out: “Vueling is young, and Aer Lingus was restructured by Willie Walsh after 9/11 … That leaves BA.”

Walsh, given a farewell cake and send-off by fellow airline executives in early March before cancelling his retirement, may now finish the job he started.

Although BA is not receiving state aid, around €30bn in grants, loans and guarantees look set to be offered to competitors around Europe.

The main expected beneficiaries are:

Lufthansa Group The German government has pledged to back the flag carrier, although a €10bn package has yet to be agreed. For its subsidiaries, Swiss Air has a €1.4bn loan guarantee, Austrian has been pledged €800m and Brussels Airlines may get €290m from their respective governments

Air France-KLM The French government has offered its carrier €7bn in loans and guarantees, while the Netherlands is looking at a €3bn loan,

TUI Group The German state bank has loaned €1.8bn to the holiday group and airline.

Alitalia Italy spent around €1.2bn nationalising the bankrupt carrier and has earmarked another €500m to help it through

SAS Received loan guarantees worth a total of €800m from Scandinavian states.

In the US United, Delta, American, South West and others are sharing up to $50bn from the US stimulus package – half of which will go directly to support payroll, with a further $25bn available in loans.