Benefit claims soared by a record 1.6 million after the economy was halted, a bigger year-on-year rise than during the Great Depression in the 1930s. The country is on course for a “tsunami of job losses” in the autumn when furlough payments are scrapped unless urgent action is taken, it is claimed. Experts called for targeted help, including a reduction in employer national insurance contributions.

Downing Street said the country is facing a “significant economic challenge” but insisted the Government is doing everything possible to “support a quick bounce-back”.

Office for National Statistics estimates showed the number of paid employees dropped by 2.1 percent, around 612,000, in May compared with March.

Job vacancies also fell to a record low, plummeting by 60 percent in May compared with two months earlier. Universal Credit claims by the unemployed and low income workers hit 2.8 million in May, a rise of 1.6 million since March.

Tony Wilson, from the Institute of Employment Studies, estimates there are 8.5 unemployed people for every job vacancy – in stark contrast with a 1.5 rate two months ago and is the highest in 20 years.

He said a temporary cut to employer NI contributions would help “support job creation”. The UK jobless rate remained largely unchanged quarter-on-quarter at 3.9 per cent in the three months to April, with unemployment at 1.34 million as nearly nine million workers were furloughed. 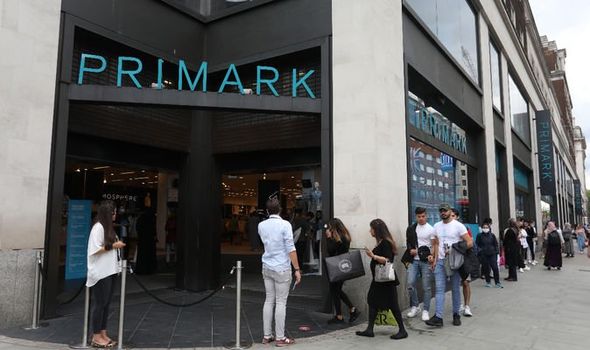 James Reed, chairman of recruitment firm Reed, called for a review of the two-metre social distancing rule, employment law and NI contributions to find ways to boost the High streets in central London yesterday did not match Monday’s scramble labour market. He added: “There is a real risk of a tsunami of job losses this autumn so urgent action now is the best way of avoiding that.”

Caroline Elsom, from the Centre for Policy Studies said: “The Government has avoided a catastrophic rise in joblessness that would have crippled the UK’s ability to recover.

“Almost 8.4 million people were ‘temporarily away from paid work’ in April but crucially not unemployed.” Shoppers continued to take to the high street yesterday though footfall was down by more than 50 percent in England on last year, yet it was a lot quieter than Monday’s reopening scramble.

The country’s high streets saw a rise in footfall of 33.6 percent by 2pm yesterday compared to the same time last week, reveals data from analysts Springboard.