New York (CNN Business)Morgan Moore’s grocery bills are sky-high. So she has started to stay away from name brands and buy more of Walmart’s Great Value private-label brand.

The freelance graphic designer in Gilmer, Texas, wanted to buy bacon on a recent trip, but “just walked away” because it was too expensive. Bacon prices increased 2.3% in November from the previous month and has surged 17.8% annually.
Moore has also started shopping more frequently at Dollar General for basic meats, dairy and eggs. Prices there, she has found, “are a little bit cheaper, but still not as cheap as I’d like them to be.”

Higher prices for groceries are putting pressure on many Americans’ grocery budgets, forcing them to change how they shop for food and essentials. 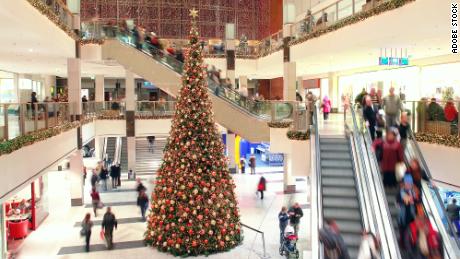 Last month, grocery prices were 6.4% higher than they were a year ago, the fastest pace of food inflation in more than a decade. Some shoppers are responding by trimming the number of products they’re buying at the store and trading down to less-expensive private-label brands. according to companies, market data, public surveys and interviews with customers. Others are switching to cheaper stores.

“It’s a squeeze,” said Matt Larson, a teacher in Salt Lake City, Utah, who shops for his wife and their four children at Kroger and Costco.
The family’s budget has gotten some breathing room from the expanded federal child tax credit and free lunches at school for the kids, he said. But Larson is buying ground beef around once a month, instead of every week, and purchasing less milk.
Ground beef prices increased 0.9% in November from the month prior and 13.9% annually while milk prices were up 0.9% in November and 4.5% annually.
“It’s hard to spend that much more on beef,” Larson said.
The family keeps extra beans, wheat, flour and other shelf-stable items in the basement, and it is turning to this safety stock to help ride out the highest rate of inflation in nearly 40 years.
“We’re relying on what we have and not going out to buy more,” he said.

Shoppers are feeling the pain at the checkout aisle, and they say they’re not going to take it much longer.
A late September survey of more than 14,000 consumers by market research term Numerator found that 20% said they would switch to cheaper brands if prices continued to rise. Seventeen percent said they would switch retailers and 10% said they would buy less frequently. Eleven percent of shoppers surveyed said they would not change their buying patterns.
Sales volume in 78% of the top 100 food categories declined during the four weeks ending November 28 from the same time a year ago, according to IRI point of sale data at leading supermarkets, big box stores, wholesale clubs and other shopping channels. Higher prices tend to lead to a decline in sales volume — the number of products sold. 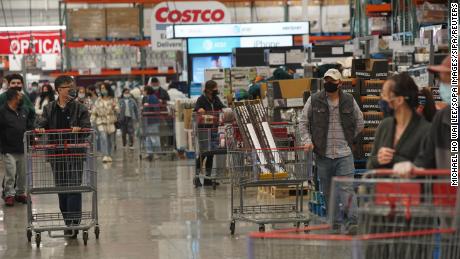 Breakfast meats, milk, eggs, cereal, ice cream, fresh bread, seafood and wine saw the steepest volume declines annually.
Although many consumers have gotten a boost from rising wages, rounds of federal stimulus during the pandemic, and expanded food stamp and child tax credit benefits, there are signs that rising prices are changing their buying patterns.
“We have seen some resistance” from customers to prices on premium cuts of meat, Sprouts Farmers Market (SFM) CEO Jack Sinclair said on an analyst call last month. “We’ve seen some trading down” on proteins.

In the past, customers have responded to higher prices or tougher economic conditions by buying fewer prepared meals and deserts, stocking up at the beginning of the month and shopping more at discount chains, said KK Davey, IRI’s president of strategic analytics.
Leaders at discount grocers such as Walmart (WMT), Dollar General (DG), Dollar Tree (DLTR), Grocery Outlet (GO), Costco (COST) and BJ’s Wholesale Club (BJ) have said in recent weeks that customers are noticing the higher prices and changing their shopping behavior. These companies say they are positioned well to attract price-sensitive customers looking to stretch their budgets.
This level of inflation “helps us a little because of the value proposition that we have,” Costco finance chief Richard Galanti said on an analyst call last week.
Customers “are feeling the inflation,” said Dollar Tree CEO Michael Witynski on an analyst call last month. “I think right now, more than ever, they are going to be relying on great value.”

Tops Markets, a regional supermarket chain in the northeast, expects shoppers to seek out more bargains as food manufacturers raise prices in January 2022.
Cost increases and supply constraints “will impact how consumers shop and select,” Kristen Hanson, the vice president of Tops’ center store merchandise, private-label brands and pharmacy, said in an email. “We would suspect shifting into lower priced items,” many of which will be Tops’ private labels.
Source: Read Full Article