HSBC (HSBC) and Standard Chartered (SCBFF) on Wednesday signaled support for the bill drafted by Beijing that will be imposed upon the city in coming months. The lenders joined other major businesses in Hong Kong voicing support for the law.
HSBC posted a photo on Chinese social media showing Asia Pacific CEO Peter Wong signing a petition supporting the law’s implementation. HSBC’s London press office confirmed the authenticity of the post.

“We respect and support laws and regulations that will enable Hong Kong to recover and rebuild the economy and, at the same time, maintain the principle of ‘One Country, Two Systems’,” the post said, referring to the governing principle that gives the city political and legal freedoms unavailable in mainland China. 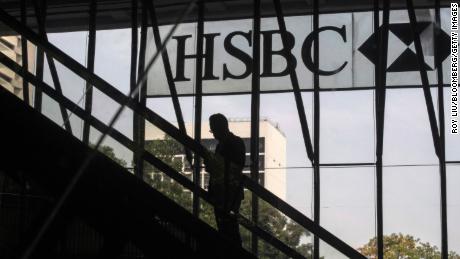 HSBC is headquartered in London, but was founded in Hong Kong and has a major business presence in China. The bank’s statement comes nearly a week after former Hong Kong chief executive Leung Chun-ying blasted HSBC for its silence.

Leung took to Facebook (FB) on Friday, calling on HSBC to publicly voice its support for the law. He said the bank should know “which side of the bread is buttered.”
Hong Kong and China are by far HSBC’s biggest moneymakers. Last year, the divisions pulled in enough money to wipe out losses in the United Kingdom and keep the company profitable.
HSBC’s Hong Kong listed shares rose 1.6% on Thursday, outperforming the city’s broader Hang Seng Index (HSI), which slumped 0.1%.
Fellow UK-based lender Standard Chartered also weighed in on Wednesday, saying in a statement that China’s proposed national security law for Hong Kong “can help maintain the long-term economic and social stability” of the city.
The proposed national security law would ban sedition, secession and subversion against Beijing in Hong Kong, which last year was roiled by anti-government protests calling for greater democracy and more autonomy from mainland China. Last week, China’s rubber-stamp parliament approved a proposal to impose the law on the city’s behalf, bypassing Hong Kong’s legislature via a rarely used constitutional backdoor.
The law also would enable Chinese national security organs to operate in the city “to fulfill relevant duties to safeguard national security in accordance with the law.”
Leaders in the United States and Britain have criticized the introduction of the law as undermining Hong Kong’s autonomy. The proposal also briefly rattled markets last month, sending the city’s benchmark Hang Seng Index (HSI) to its worst day since 2015. And US firms have expressed concern about what the law could mean for the city’s future as a global business hub, particularly after Washington responded by signaling an intent to end its special economic and trading relationship with Hong Kong.
Even so, HSBC and Standard Chartered are among a growing list of top businesses in Hong Kong that have come out in a show of support for the contentious legislation.
Jardine Matheson, one of Hong Kong’s oldest British trading houses, issued a full-page advertisement on Wednesday in pro-Beijing newspapers Ta Kung Pao and Wen Wei Po, which have strong ties to the Chinese government.
“Establishing the legal framework that upholds national security is very important. It ensures that Hong Kong continues to attract investment, enhance employment opportunities and protect people’s livelihood,” the company said.
Swire Pacific (SWRAY), one of Hong Kong’s richest family-owned business empires, and billionaire Li Ka-shing, founder of telecom and retail conglomerate CK Hutchison, have also voiced support for China’s move.
Swire said that “the enactment of national security legislation will be beneficial for the long-term future of Hong Kong as a world-leading business and financial centre.”
“It is within each and every nation’s [sovereign] right to address its national security concerns,” Li, of CK Hutchison, said in a statement issued last week.

“Meanwhile, [Hong Kong] has the mission-critical task to fortify its citizens’ faith and maintain international trust in the constitutional principle of ‘One Country, Two Systems,'” he added.
— Alexandra Lin contributed to this report.
Source: Read Full Article