The dish that gives this play its title was, we’re told more than once, a specialty of the late patriarch whose death has occasioned a very rocky family reunion, a get-together where the only consensus seems to be that grandpa’s traditional culinary contribution was beloved more for sentimentality than flavor.

And so we’re handed an apt metaphor for Chicken & Biscuits, the new play by Douglas Lyons, directed by Broadway newcomer Zhailon Levingston. Chicken & Biscuits, opening tonight at Circle in the Square Theatre, is one of seven Broadway productions written by Black playwrights set to open this fall, and for that alone worth celebrating.

But new voices doesn’t always equal fresh voices, as this safe, cozy comedy makes clear. Like grandpa’s biscuits, stale is the word that comes to mind.

Lifting every last detail from Tyler Perry’s recipe book, this family comedy is brimming with stock characters, creaky jokes, tired references and easy, feel-good sermonizing. Bickering relatives speechifying with exposition and put-downs? Family secrets guessable even by the most distant outsider? Characters that can be summed up in one-word signifiers? Check, check and check.

Set on the day the beloved patriarch is being laid to rest, Chicken & Biscuits uses the funeral as a cauldron for comic confrontations, grudge airings and, inevitably, the reconciliations that arrive after the requisite moral lessons are belabored. Pious church lady Baneatta (Cleo King) disapproves of her flashy, cleavage-displaying hairdresser sister Beverly (Ebony Marshall-Oliver), who bickers with her loudmouthed teenaged daughter La’trice (Aigner Mizzelle), who annoys snooty cousin Simone (Alana Raquel Bowers), who disapproves of gay brother Kenny (Devere Rogers), who brings culturally clueless white boyfriend Logan (Michael Urie) to a family gathering that would test the mettle of even the sturdiest partnerships.

No spoiler alerts necessary to say that everyone will hug it out before anyone is put in the ground, or that Baneatta’s ominous “stay away” warning to to an unseen caller that opens the play will result in an unwelcome visitation late in the day, or that this visitor will offer a revelation about dear old dad that only those on stage won’t see coming. The plots twists land with all the nuance of dialogue designed solely for audience feels and murmurs of “awwww.”

What is unexpected, through, is Chicken & Biscuits‘ rejection of all but the most time-tested ideas and sitcom-safe moralisms. This is a play so committed to remaining within safe confines that even its waiting-to-be-corrected antagonists seem of a 1990s vintage. So we get the churchy mom’s homophobia played for laughs before her inevitable mind-broadening. Elsewhere, it’s the insults that feel blithely retro: The supposedly enlightened gay brother levels the words “single” and “ugly” in arguments as if both are unspeakable failures.

The play’s retro bent isn’t limited to its issue-mongering, either. When even the bratty teenager is still making Jerry Springer jokes, or the bigot mother misremembers the name of her son’s lover in every possible way but “Derwood,” someone’s trove of cultural memes needs serious updating. 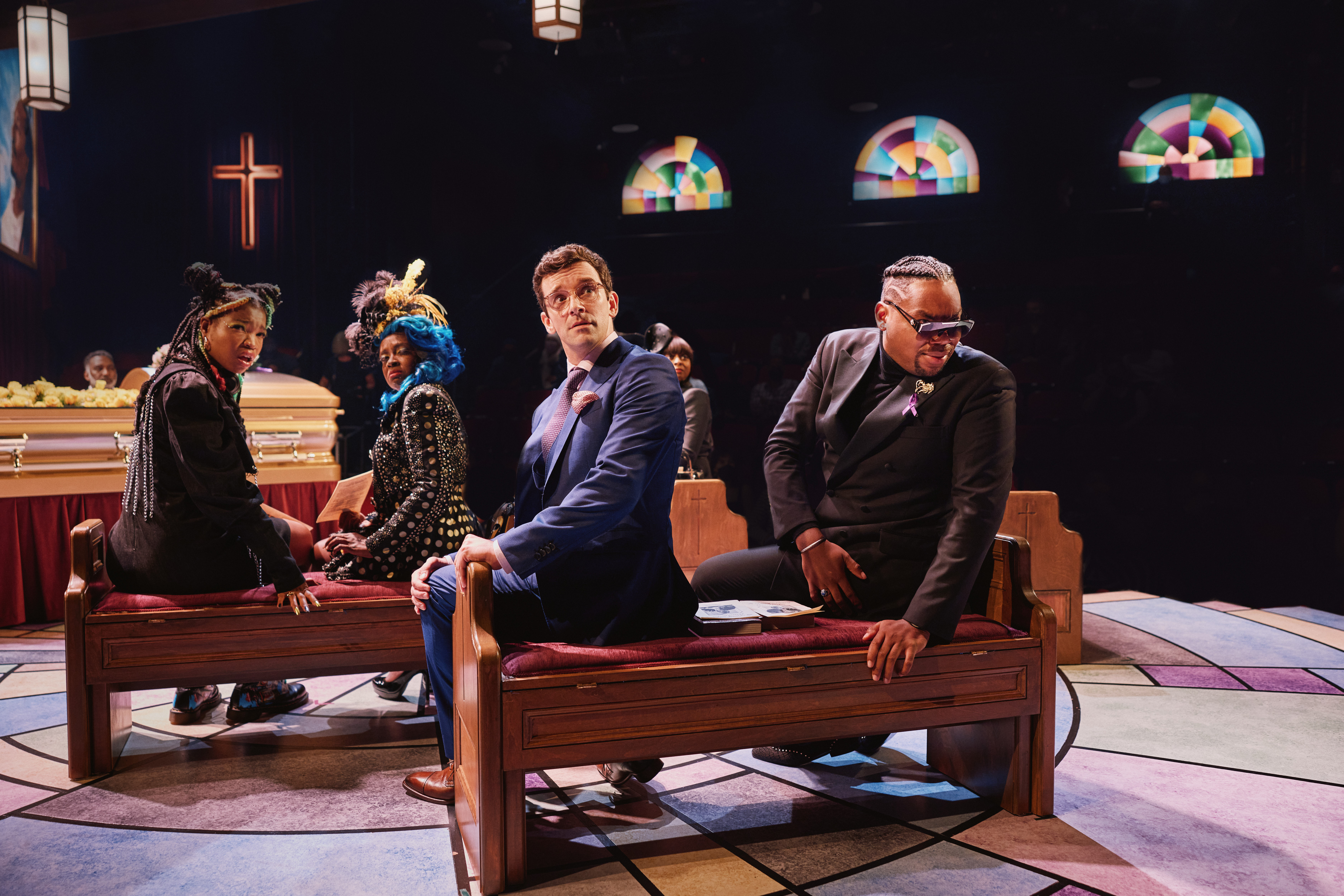 Nowhere is this pandering use of the familiar more apparent than with Urie’s overplayed Logan. A character that could have been put to use as comic fodder about privilege and unthinking self-regard instead becomes a repository for dumb jokes about white people liking bundt cakes. Here’s a guy so culturally ignorant about his lover’s community that he wonders aloud why all the congregants of this Black church are shouting back at the preacher, or asking if the chapters in this seemingly foreign object in his hands – the Bible – are arranged alphabetically.

Levingston has directed his cast to play for the rafters, and some of the more skilled performers on the stage of the large, in-the-round venue manage to go big without flailing. Ebony Marshall-Oliver and the always great Norm Lewis come off best, and Cleo King, the Mike & Molly and Deadwood actress making her Broadway debut, brings some small depth to perhaps the stockiest of the play’s stock characters, but even she can’t deliver the reams of exposition in any way that doesn’t sound like a playwright tying up loose ends.

Chicken & Biscuits has its bright spots – Lawrence E. Moten III’s set design effectively conveys church at the unwieldy Circle in the Square, and Dede Ayite’s costumes walk the line between realism and the gaudy jokes some are meant to be. The lighting design by Adam Honoré and sound design by Twi McCallum work even when called upon by the director for use in silly, busy business – a brawl rendered in freeze frames and black-outs, an ominous line-reading accompanied by the out-of-nowhere slashes of the Psycho violins.

Wait, Psycho music, at a funeral in 2021? Well, why not? It’s a joke everyone will get, an aural cue everyone knows. In Chicken & Biscuits, each reference, emotion and life lesson is as handed down as a youngest child’s fuzzy mittens, so a musical punchline from a 61-year-old slasher film makes sense. It’s bite is long gone, survived by a shared memory of livelier days.