With Monday’s updates, over 99% of California’s population was in the Purple, or most severe, tier of Newsom’s reopening order.

In terms of the timing of the orders, “Those are being assessed in real time” said Newsom before stressing should not think in terms of weeks, but days.

As to what threshold could trigger further action, “We are looking at intensive care capacity as the trigger for further action,” California Director of Health and Human Services Dr. Mark Ghaly.

The governor went through projections that indicated the number of COVID patients in CA hospitals could double or triple in the next month.

Even more frightening, he indicated that state models show that California ICUs will be overwhelmed. In Los Angeles, that tipping point is projected to come in mid-to-late December. (See chart.) 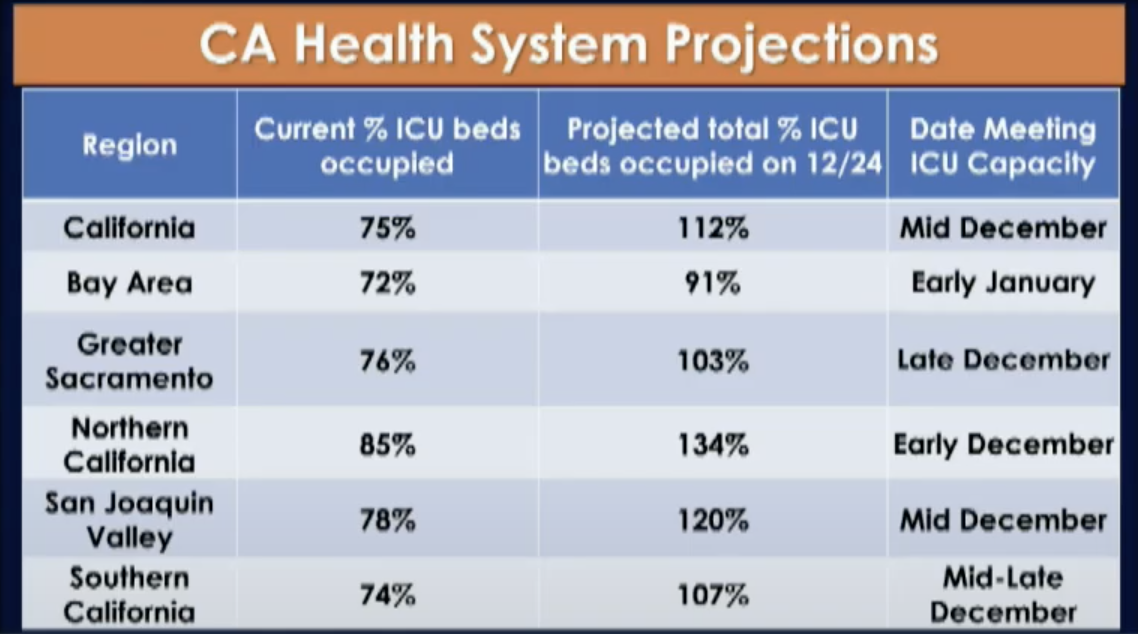 “This is in absence of improved…efforts,” stressed Newsom. He noted that Californians could still “bend the curve” with their actions.

He said projections are, without any further interventions, ICU patients will jump up 76% over the next two weeks.

There were 380 newly hospitalized patients reported on Monday for a total of 8,578. That’s a rise of 4.4% day over day. Along with the 4%-plus daily rises last week, the result makes the state’s hospitalization graph appear nearly vertical. 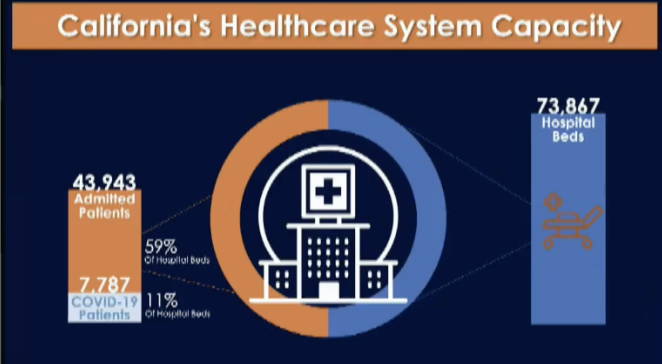 There were 14,034 new cases reported on Monday. The 7-day average of daily COVID infections is north of 14,000. For comparison, the 7-day average during summer coronavirus peak period was 9,881.

Newsom said the number of daily tests delivered in the state continues to increase, which is good news. Over the weekend, testing was “north of 223,000 tests per day,” he said. The bad news is that, even as tests have risen, the state’s positivity rate has as well.

“The high case rates that we have seen in the past few days have not even begun to impact hospitals yet,” said Dr. Ghaly.

“We anticipate, given Thanksgiving gatherings, that we will see another surge in cases,” said Newsom.

Dr. Anthony Fauci offered his own take over the weekend on Meet the Press saying as the result of Thanksgiving gatherings and travel, “We expect unfortunately, as we go into the next couple of weeks into December, that we might see a surge superimposed on top of the surge that we’re already in.

“The projected rate of increase” due to those actions and others, said Newsom, is unlike anything the state has ever seen.

Given that, “Everything is on the table” in terms of restrictions, said Ghaly.