The months of protests and riots in Portland have prompted some businesses in the city to opt to move out completely or relocate outside its central district, according to a report on Monday.

Greg Goodman, the co-president of the Downtown Development Group, said in a letter to Mayor Ted Wheeler and members of the Portland City Council that the exodus of companies wasn't related to the Black Lives Matter movement “but does have most everything to do with the lawlessness you are endorsing downtown.”

“The number is like nothing I have seen in 42 years of doing business in downtown,” he wrote, according to Portland's KOIN. 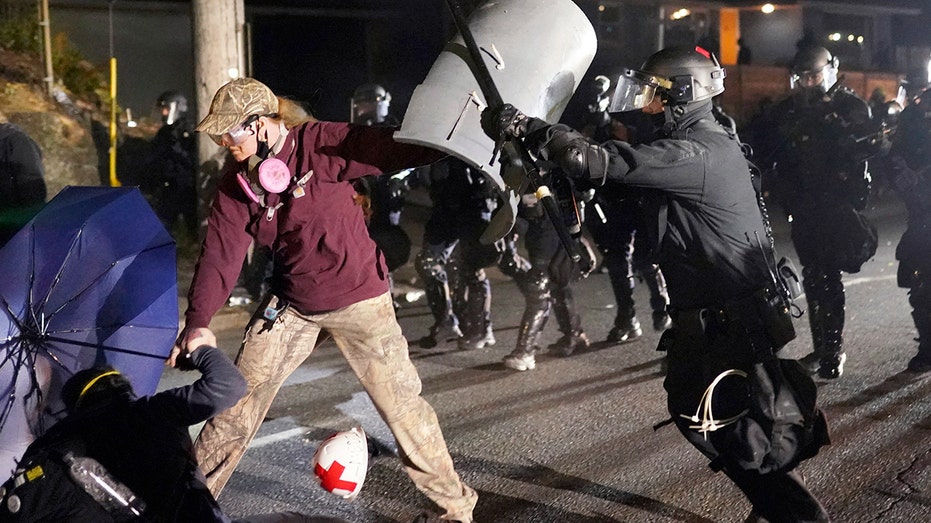 A Portland police officer shoves a protester as police try to disperse the crowd in front of the Multnomah County Sheriff’s Office early in the morning on Saturday, Aug. 8, 2020 in Portland, Ore. (AP Photo/Nathan Howard)

Goodman said companies include Daimler Chrysler, Airbnb, Banana Republic, Microsoft, Saucebox, and Google, which he claimed: "leased 90,000 square feet in the Macy’s building [and] has stopped construction of their improvements."

"The list goes on and on. If you know a retail or office broker, give them a call and ask them how many clients they have are trying to leave," he continued.

Goodman encouraged city leaders to "walk around downtown Portland in the morning," adding that he would personally give them a tour.

"You aren’t sweeping the streets, needles are all over the place, garbage cans are broken and left open, glass from car windows that have been broken out is all over the streets, parks are strewn with litter," he wrote. "You are willfully neglecting your duties as elected officials to keep our city safe and clean.”

One protester told the station that he also understood the frustration stemming from the ongoing violence, and questioned if demonstrators could "do a different form of protest besides burning down something?"

Police have argued that the protests are making it difficult for them to respond to other calls because their resources are tied up. On Saturday, police said 30 officers were available to manage the crowd that numbered several hundred.

Authorities added how the bureau “had to be judicious with our limited resources” because many officers worked during the previous night's demonstrations, according to The Oregonian.

In a statement to KOIN, Wheeler said he is reviewing the decision as to why officers didn't step in on Saturday when right-wing activists, and Black Lives Matter counter-demonstrators fought.

“I vehemently oppose what the Proud Boys and those associated with them stand for, and I will not tolerate hate speech and the damage it does in our city. White nationalists, particularly those coming to our city armed, threaten the safety of Portlanders, and are not welcome here," Wheeler said. "We are at a critical place where police officers are needed to intervene in protests where police officers themselves are the flashpoint.”