New York (CNN Business)Are upper middle class and affluent shoppers starting to feel the pinch from higher prices and geopolitical concerns? If so, what does that mean for the rest of American consumers?

Stock market volatility, inflation and concerns about rising interest rates could soon slow all parts of the economy — even demand for luxury goods.
Gary Friedman, the CEO of high end furniture retailer RH (RH), said in its earnings call last week that “we have experienced softening demand in the first quarter that coincided with Russia’s invasion of Ukraine in late February and the market volatility that followed.”

“I don’t think anybody really understands how high prices are going to go everywhere, in restaurants, in cars and everything,” Friedman said, adding that those increases will hurt all consumers and that companies like his are going to be in a “tricky space.”

Shares of RH, which Warren Buffett’s Berkshire Hathaway (BRKB) owns a stake in, plunged on the cautious comments and weaker outlook.

Other companies that cater to wealthier consumers are also starting to warn that demand could be hit by all the worrisome headlines.
“The market is experiencing unprecedented volatility from the heightened impacts of a number of macroeconomic and geopolitical challenges. These include the war in Ukraine as well as inflationary pressures, which impact both our own business and the overall consumer spending,” said Stefan Larsson, the CEO of PVH (PVH), which owns the Tommy Hilfiger and Calvin Klein brands and licenses the Michael Kors and Kenneth Cole New York brands.

Larsson added that the company will “continue to navigate ongoing pandemic headwinds, particularly supply chain and logistics delays, especially in North America, in addition to the recent virus resurgences in Asia.”
But some Wall Street analysts are still optimistic that luxury companies will continue to do well.
“Luxury brands should outperform, as they will likely continue to have pricing power, which will keep margins elevated, and they could see a boost if international travel returns to pre-pandemic levels,” said Zachary Warring, an analyst with CFRA Research. 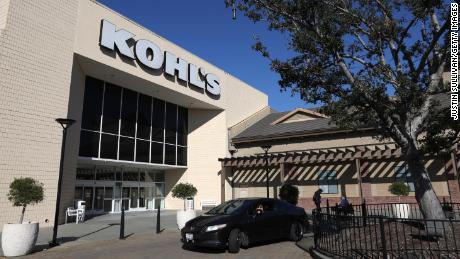 Warring specifically cited pricey parka maker Canada Goose (GOOS) and athleisure apparel giant Lululemon as two companies that could do well even if inflation worries persist. Lululemon (LULU) shares soared last week after the company reported strong earnings.
Worries about a major slowdown in the US could be overblown as well.
“We don’t buy the gloomy scenarios for luxury just yet,” Erwan Rambourg, global head of consumer and retail research at HSBC, said in a report last week. “We are surprised to hear some talk of dire sales decline scenarios in the US, given continued evidence of a good appetite for luxury brands.”
Rambourg said that LVMH (LVMHF), the luxury goods giant that bought Tiffany early last year and also owns Louis Vuitton and Dior, should impress investors when it reports earnings later this month. Rambourg said that sales in most of the world should be solid, with the notable exception of China.

“The only market for which we expect moderation of growth to be a bit visible is mainland China,” Rambourg added, pointing out that Covid-related lockdowns could hurt luxury demand there.
But Rambourg also didn’t rule out the possibility of a global market and economic slump eventually hitting luxury sales. He said in the report that a recession, a sharper drop in stock prices and a prolonged conflict in Ukraine are the key risks facing high-end consumer companies.
Source: Read Full Article