New York (CNN Business)Boeing is offering employees buyouts as its CEO said it will take years for the airlines and aerospace industry to recover from the coronavirus crisis.

The aircraft maker has been hit hard by the coronavirus. Airlines around the globe have seen their revenue virtually disappear and are taking steps to cut capital spending, including aircraft purchases.
“One thing is already clear: It will take time for the aerospace industry to recover from the crisis,” Calhoun said in the memo.

“When the world emerges from the pandemic, the size of the commercial market and the types of products and services our customers want and need will likely be different,” he wrote. “We will need to balance the supply and demand accordingly as the industry goes through the recovery process for years to come. It’s important we start adjusting to our new reality now.”
The $2 trillion stimulus bill passed by Congress last week included a $50 billion bailout for US airlines. But most of Boeing sales are to airlines elsewhere in the world, and while bailouts are likely in some other countries, it’s not clear how much help will be available. Some airlines are likely to go out of business, and most are expected to delay or cancel delivery of planes they had ordered.
Boeing started the year with a backorder of 5,350 commercial jets that normally would have kept its plants building planes for years to come, since it can typically only complete about 800 jets a year. But more than 4,000 of those planes on order are destined for airlines outside of the United States.
Boeing is also eligible for loan guarantees as part of that US government stimulus. The company has been taking other steps to preserve cash, including suspending its dividend payments for the first time since 1942. Last year it paid out $4.6 billion in dividends. And it also arranged to borrowed $13.8 billion from a syndicate of major banks in February, and drew down that cash last month. 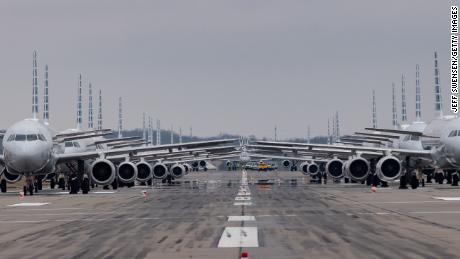 Boeing went into this crisis dealing with another of its own: The grounding of its best-selling jet, the 737 Max, due to two fatal crashes that killed 346 people.

It continued to build the jets for about 10 months after the grounding, but it had temporarily shutdown that line in January when it became apparent it would not get FAA approval to fly the jet again until the middle of this year.
Last week it shut its other production lines in Washington state due following the death of one of the employees in Everett, Washington, due to the coronavirus. It has continue to pay its employees who are worked on those lines for at least two weeks.
Source: Read Full Article