Billionaire investor Mike Novogratz told CNBC in an interview Wednesday that he is shocked at the pace of crypto adoption now that big Wall Street players are moving into the space.

The Galaxy Digital CEO believes bitcoin is on track to meet and ultimately exceed gold’s market capitalization as its price continues to rise. “I do think bitcoin is on an inevitable path to having the same market cap and then a higher market cap as gold,” he said on CNBC’s “Squawk Box.”

Bitcoin’s market cap is currently about $1.1 trillion, according to data from Coinmarketcap.com, while that of gold’s is roughly $10.9 trillion.

Late last year, Novogratz predicted bitcoin would hit $65,000. The digital asset was last trading around $59,241 per coin on Thursday, and it is up about 800% in the last 12 months. But its emergence as digital gold has bolstered his belief that bitcoin will outpace the value of the world’s traditional safe-haven. 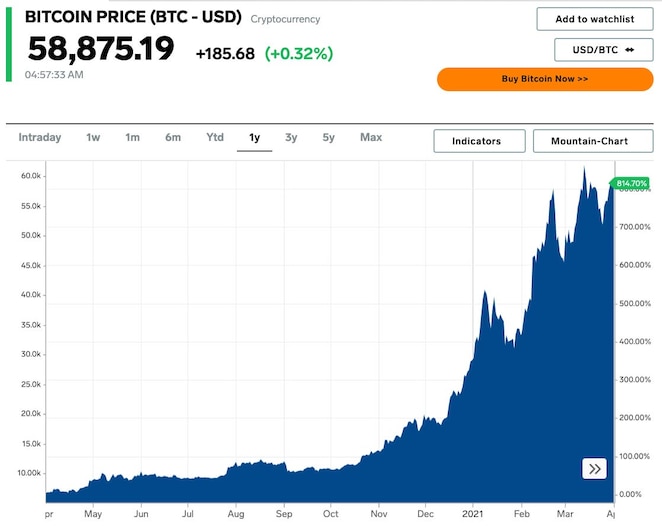 “Adoption’s happening faster than I predicted. It’s shocking to me how fast people are moving into the system,” Novogratz said.

Goldman Sachs is the latest Wall Street institution that is close to offering bitcoin and other digital assets as an investment vehicle for its rich clients, according to CNBC. The bank would join Morgan Stanley, which announced similar access to wealthy clients last month.

PayPal also said this week it will soon allow US consumers to use their crypto holdings at checkouts to make purchases. Crypto payments as a use case is becoming more and more tangible to fintech companies and its customers, which might mean curiosity from retail investors, Paolo Ardoino, CTO at cryptocurrency exchange Bitfinex, said.

“The more people involved in this space, the more big firms, if it’s Tesla, or MicroStrategy, or Goldman, or Morgan Stanley, the more wealthy individuals – the harder it is politically to say ‘hey we don’t like this anymore’,” Novogratz said, adding the US has “crossed the Rubicon” in terms of the number of people holding bitcoin.