Increasing expectations of a Democratic party victory in the race for the White House and on Capitol Hill appear to be driving investors towards stocks that could benefit from the policies that could accompany a Biden administration, including generous government stimulus spending.

While Wall Street famously failed to anticipate Donald’s Trump’s victory in 2016, there has been a shift in investment patterns over recent weeks from US government bonds and tech stocks to buying shares in smaller companies.

Investors have also marched into stocks in renewables – which could boosted by the Democrats’ commitment to greener energy initiatives. 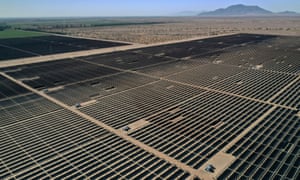 Both moves, analysts say, are based on signs in polling of voters’ intentions and predictive markets that suggest Joe Biden should win the presidency and his party wins control of both houses of Congress in a so-called “blue wave” victory on 3 November.

“The swing in odds has been accompanied by a rally in US equities and an uptick in US Treasury yields,” said Capital Economics in a research note to investors this week. “Investors are becoming more and more focused on how the election result will shape near-term fiscal policy.”

According to online bookmakers, the chances of a Biden victory have improved since the beginning of the year, and have increased from 65.8% to 69.2% two weeks on from the first presidential debate. Trump’s chances of winning have decreased from 34.8% to 32.3% over the same two-week period.

On Monday, Betfair said: “A huge shift in the US election betting on the exchange over the weekend means Joe Biden is now rated twice as likely as Donald Trump to win.”

As the odds of Biden victory have shortened, investors appear to have become less fearful of a Democrats-controlled government pushing through corporate tax increases and increased spending, and more focused on the likelihood of a generous, post-election fiscal stimulus package.

On Tuesday, prospects for a new round of stimulus spending before the election dimmed as talks between the Democratic and Republican leadership on the Trump administration’s $1.8tn (£1.38tn) proposal, up from $1.6tn, failed to produce an agreement. 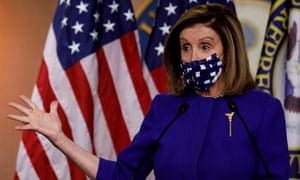 The House Democrat speaker, Nancy Pelosi, who is pushing for $2.2tn, said the proposal fell “significantly short of what this pandemic and deep recession demand”.

Prospects that a Biden administration could push stimulus spending to $3tn in January has investors “thinking more about a broader-based economic recovery, and not just the narrow one focused on tech that we’ve seen recently”, said Oliver Jones, senior markets economist at Capital Economics.

That, in effect, is a reversal of pandemic trends in which growth stocks, largely pharmaceutical and technology, have wildly outperformed traditional value stocks in banking, industrial and energy sectors.

Instead, some of those smaller stocks have begun to outperform their bigger counterparts, with the benchmark S&P 500 index gaining 9% since late September.

“As there have been in jumps in the probability of the ‘blue wave’, we’ve seen value stocks doing a little better than growth stocks,” Jones said.

The shift in sentiment is in contrast to two recent investor preoccupations: that Trump may try to cling on to power in the event of defeat and that Democrats would be bad for stocks by seeking to impose extra regulation, taxes and healthcare spending.

“All else equal, a blue wave would likely prompt us to upgrade our [US economic growth] forecasts,” Jan Hatzius, the chief economist at Goldman Sachs, said this month.

The shift in sentiment has also led investors to move money into stocks in renewables, which could do well under Biden’s green-energy proposals.

The Invesco solar ETF has risen almost 150% so far this year. That is almost double the increase of the index that tracks tech stocks, which were behind the market bounceback after the coronavirus lockdowns in March and April.

Last week, the solar and wind energy company NextEra exceeded the market value of ExxonMobil and Chevron, the oil multinationals that have for decades been among some of the most-valuable energy companies.

“I have never seen the writing on the wall so clear: the recovery is going to be green and digital,” Geraldine Sundstrom, a fund manager at Pimco, told Reuters.

It is, however, always worth remembering that Wall Street has a patchy track record of predicting the outcome of elections and the economic path that a new administration will seek to establish.

In the aftermath of Trump’s 2016 election, markets anticipated that the incoming administration would embark on a massive round of infrastructure spending. Instead, there was a corporate tax cut and a trade war.

There are so many variables in play – healthcare squeezed by drug pricing, stocks in fossil fuel energy companies hit by new green initiatives, looming anti-trust actions against Facebook and Google, and a banking sector potentially facing tighter regulations under the Democrats – that the future, like the election, remains uncertain.

“I’m sure it will be the same this time around as it was in 2016,” Jones said. “The things we’re focused on now, like the size of a fiscal stimulus package, will be completely different in six months time.”