After selling brands like Pulsar, Boxer, Platina and RE in over 70 countries, Bajaj Auto plans to enter Thailand this year followed by Brazil next year. 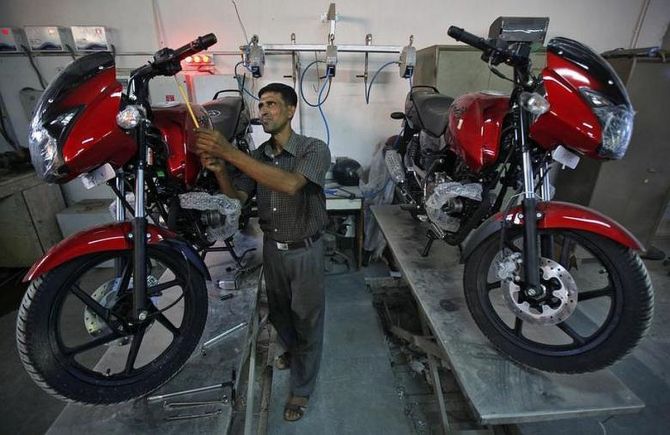 The stock has gained 11 per cent over the year, with a 79 per cent rally from the lows in March.

This helped it reach the milestone. Bajaj Auto’s current m-cap is 63 per cent higher than Hero MotoCorp and 43 per cent more than Eicher Motors, its closest peers.

“The sharp focus on motorcycles and unwavering commitment to strategies of differentiation, as well as the practice of total productive maintenance combined with global ambitions, have made Bajaj the most valuable two-wheeler firm across the globe,” Rajiv Bajaj, MD of the company, said in a statement.

In November, the company reported a 5 per cent growth in volumes, largely led by exports, which were up 14 per cent even as domestic volumes were down 4 per cent.

Exports accounted for 53 per cent of the volumes compared to 48 per cent a year ago.

After selling brands like Pulsar, Boxer, Platina and RE in over 70 countries, Bajaj Auto plans to enter Thailand this year followed by Brazil next year, according to the company.

What should help sustain export growth is the company’s strategy of expanding its presence, both in existing as well as new markets for both motorcycles and three wheelers.

This, coupled with recovery in crude oil prices, should help improve its volumes in the key markets of Africa and South America.

The firm also stands to be a key beneficiary of the government’s PLI scheme in the two-wheeler space.

Incentives range from 2-12 per cent for incremental sales and exports.

In the domestic market, it has been gaining share in the executive segment with the Pulsar 125cc and could gain traction as the urban markets open up.

Higher growth in the premium segment is expected to help the company both on the volumes as well as the margin fronts.