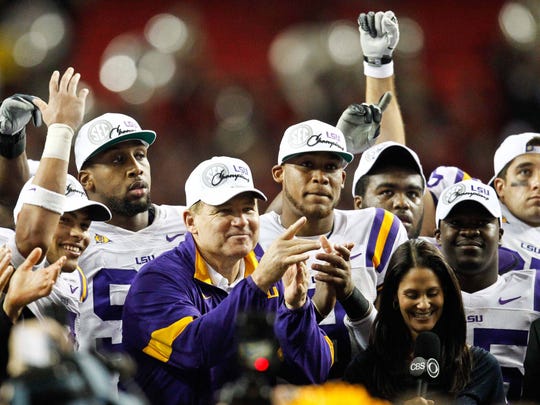 Former Louisiana State University football coach Les Miles on Wednesday ended his legal bid to prevent the public release of a 2013 investigation report into allegations that he sexually harassed student workers and made sexist comments about others.

USA TODAY sued LSU for access to the report in January, after the university refused to release it. Miles intervened in the court case days before it was set for a hearing, saying that its release would violate his privacy rights under the Louisiana constitution.

But in a letter to Judge Richard Moore on Wednesday, Miles’ attorney reversed course, saying its release was now necessary to defend himself against negative media attention.

“Quite simply, Mr. Miles cannot defend himself against the inaccurate and unfair media attention that this matter has received during the past week without citing to the Report’s findings and conclusions,” wrote his attorney, Peter Ginsberg.

LSU still has objections to the release of the records, which must be resolved by the court.

“We appreciate that Coach Miles is dropping his objection to the records being released,” said Scott Sternberg, attorney for USA TODAY. “We feel optimistic that the judge will eventually rule that the records should be released to the public so the public can review these important documents.”

The internal investigation into Miles is the latest discovery by USA TODAY, which has revealed widespread mishandling of sexual misconduct allegations by LSU’s athletic department and broader administration. The news organization’s reporting has prompted LSU to hire outside law firm Husch Blackwell to audit its handling of dozens of sexual misconduct cases since 2016.

Some or all of the internal Miles investigation may be revealed as part of the Husch Blackwell report, which the university plans to release on Friday.

The Miles probe, done quietly by a different law firm, Taylor Porter, came at a time when Miles was one of the nation’s most successful and beloved coaches in college football, and one of an exclusive club to win a national championship. Though his actions were deemed to be improper, Miles appears to have faced no public repercussions from LSU.

It wasn’t until 2016, after LSU got off to a 2-2 start, that LSU fired him. He now is the head football coach at the University of Kansas.

Kansas was not aware of the allegations when it hired Miles in 2018, the school said when USA TODAY disclosed the allegations Feb. 24. It said then that it had spoken to Miles, and was continuing to gather information.

USA TODAY learned about the investigation from interviews with three people who were in a position to know about it and who spoke on the condition of anonymity, for fear of retribution. The people described the nature of the allegations and the investigation’s conclusions.

In court documents, Miles’ attorneys claimed that the records should remain completely private because the allegations “were found to be without corroborative evidence.” The investigation, they said, “did not result in any discipline or finding of wrongdoing” and that it “exonerated” Miles.

At the same time, his attorneys said the records contain information of “a highly personal nature,” the disclosure of which would cause Miles to “immediately suffer serious injury to his reputation and personal life” and “irreparable loss.”

The investigation did not, in fact, absolve Miles of wrongdoing, USA TODAY has learned from independent sources. Nor did it conclude that the allegations were baseless. Rather, investigators determined that Miles’ conduct did not rise to the level of breaking the law.

USA TODAY has argued that, as a public figure and the highest-earning state employee at the time, the public’s right to know about the probe outweighed Miles’ privacy interests. It also argued that the hiring of an outside law firm does not make an internal investigation confidential.