San Francisco (CNN Business)At Amazon’s newest grocery store, you can ask Alexa voice assistants where to find milk, scan and check out your groceries using your shopping cart, and pick up books you ordered off the e-commerce giant’s website.

The first Amazon Fresh grocery store is set to open to the general public in a few weeks just outside of Los Angeles in Woodland Hills, California.
The concept is meant to reach different customers than Amazon (AMZN)‘s Whole Foods chain, which it acquired for $13.7 billion three years ago. Whole Foods specializes in natural and organic products and doesn’t carry mainstream brands like Coca-Cola, Tide and Oreos.

“Grocery is a very large consumer sector; by most measures, it’s $800 billion in the US,” Jeff Helbling, vice president of Amazon Fresh stores, told CNN Business. “And collectively, we’re relatively small in the space.” 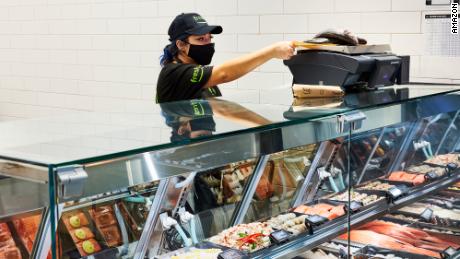 Including Woodland Hills, Amazon confirmed it is opening seven Amazon Fresh stores — four in California and three in Illinois — but has not announced their opening dates. Some of them are online-only sites for the fulfillment of grocery delivery orders.
The Amazon Fresh stores could help Amazon grab market share from Kroger and Walmart and gain additional shopper data, while expanding its private label lineup, analysts have told CNN Business.
The 35,000-square-foot market in Woodland Hills, which is opening Thursday to select local residents before opening widely in the coming weeks, features departments similar to what you would find in your local grocery store — produce, dry goods, seafood and meat counters, as well as prepared foods. But the Amazon Fresh store, which bears the same name as Amazon’s grocery delivery business, is also laden with technology.
Stationed throughout the store are Amazon Echo Show smart displays that can summon Amazon’s virtual helper, Alexa, which can help answer customers’ queries such as, “Where can I find the mayonnaise?” 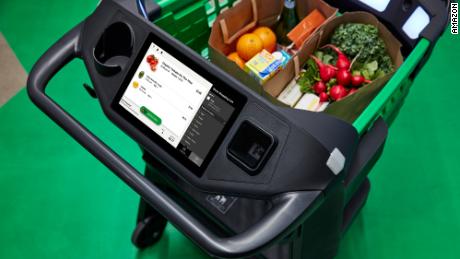 The stores also will debut the Amazon Dash Cart, a shopping cart that scans groceries, links to online shopping lists, and doubles as a checkout stand.
The “smart cart” resembles a one-basket convenience cart and is equipped with bar code readers, sensors and scales. After using their Amazon app to effectively log into the cart, customers place one or two shopping bags in the basket. The cart can scan items with a bar code and weigh barcode-less products such as produce.
Customers then exit through a specific sensor-enabled lane that automatically charges the credit card on their Amazon account.

This isn’t Amazon’s first rodeo in trying to enable an autonomous and cashier-less shopping trip. The company’s Amazon Go convenience stores use hundreds of cameras and proprietary AI technology to allow customers to walk in, grab a handful of items, and get an electronic receipt as they leave.
The Amazon Fresh stores, however, will have traditional checkstands and cashiers for customers who opt to not use the Dash Cart or who have larger grocery trips.
Source: Read Full Article