New York (CNN Business)Ascena Retail Group, the owner of Ann Taylor and other clothing brands, has filed for bankruptcy. It’s the latest retailer forced to take that step during the Covid-19 pandemic.

The company, which has been struggling long before coronavirus struck, said it would close all of its Catherines stores, a significant (but undisclosed) number of Justice stores and a smaller number of Ann Taylor, LOFT, Lane Bryant and Lou & Grey stores.
As of August 3, 2019, the end of its last fiscal year, the company had about 53,000 employees, 40,000 of whom worked part-time. As of February 1, it had 2,764 stores spread among its various brands. 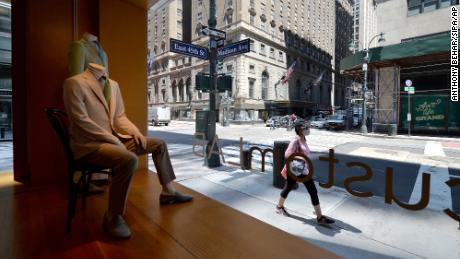 But that store count was down 600 since the beginning of August after it closed about 200 other locations in each of the previous two fiscal years, and about 100 net store closings in fiscal 2017. It had to sell off one of its brands, Maurices, last year.
It closed all of its stores on March 18, because of health concerns around the pandemic. The company furloughed 90% of its staff, withheld rent payments on closed stores and delayed payments to vendors. It started to reopen stores in early May. The company said Thursday 95% of its stores are now open.

The handwriting was on the wall for Ascena’s bankruptcy for quite some time. It borrowed $230 million from existing credit lines to try to ride out the crisis. It ended its fiscal third quarter in early May with $439 million in cash on its balance sheet and debt of $1.3 billion. In late May it warned there was substantial doubt about its ability to stay in business throughout the next year.
Ascena said it reached a deal with its creditors to reduce its debt by $1 billion, and it received $150 million in new capital to continue operating during its bankruptcy.
“The meaningful progress we have made driving sustainable growth, improving our operating margins and strengthening our financial foundation has been severely disrupted by the Covid-19 pandemic,” said Carrie Teffner, interim executive chair of Ascena, in a statement. “As a result, we took a strategic step forward today to protect the future of the business for all of our stakeholders.”

A history of trouble

Ascena (ASNA) has reported only one year with a positive operating profit during the last five years, with operating losses of $2.4 billion since the summer of 2014.
The company owns such brands as Ann Taylor and LOFT, which are in its premium women’s clothing category. It purchased those brands in 2015 in a deal valued at $2 billion. It also owns plus-size women’s clothing brands Lane Bryant and Catherines, as well as children’s clothing retailer Justice and value brand Dressbarn.
But the 2015 acquisition of Ann Taylor and LOFT did not turn around the company’s fortunes as hoped. As the losses mounted, the stock price collapsed, losing 96% of its value between the time of the deal and this past December, when the company implemented a reverse 20-to-1 stock split to pump up the price and avoid having shares delisted.
That didn’t help: Shares lost more than 90% of that inflated value between the time of the reverse split and Wednesday’s close.
The company warned its shares will become worthless as part of the bankruptcy. But they could keep trading during the reorganization process and even see some gains. Shares of a number of bankrupt companies, including Hertz (HTZ) and JCPenney (JCP), have posted strong gains recently because of day trader interest.
As was the case with a number of companies that were heading for bankruptcy, including JCPenney and Hertz, Ascena approved a lucrative retention bonus plan for its top employees in mid-June. CEO Gary Muto and interim board chairman Carrie Teffner received bonuses of $1.1 million each, while Chief Financial Officer Dan Lamadrid received just over $600,000.

The coronavirus crisis has wreaked havoc on clothing retailers and department store chains. Nonessential businesses were closed for weeks at a time. Job losses spiked, and millions more people working from home haven’t needed to buy dress clothes —
The bankruptcy follows Brooks Brothers, the 200-year-old menswear retailer that clothed 40 of the nation’s 45 presidents. A string of other national retailers have also filed for bankruptcy starting with clothing retailer J.Crew on May 4. That was followed in short order by department store operators Neiman Marcus and JCPenney. Another clothing retailer, Tailored Brands (TLRD), owner of Men’s Wearhouse and Jos. A. Banks, has warned it could be forced to file for bankruptcy.
A bankruptcy filing does not mean a company will be forced out of business. Many companies have used the process to shed debt and other financial obligations, cut costs, and gone on to post record profits. That includes automaker General Motors (GM) and many of the nation’s airlines.

But many companies that have filed for bankruptcy with the intention of staying in business have not survived the process. That is what happened to Toys “R” Us in 2018, and more recently to furniture retailer Pier 1, which filed for bankruptcy in February before the Covid-19 pandemic hit retailing in the United States. It intended to stay in business, but announced plans in May to permanently close all its stores.
All the major retailers that have toppled into bankruptcy had been having problems before the health crisis.
Source: Read Full Article