New York (CNN Business)Airlines have done away with their $200 change fees, giving passengers the flexibility they’ve long desired — at a time when few people are traveling.

None of the major US airlines have signaled they will abandon change fees altogether. But as the Covid-19 pandemic continues to spread, they have repeatedly delayed their deadlines for reimplementing the fees. Delta and American Airlines, for example, recently extended their no-change-fee policy through September, and United pushed its deadline to July 31.
US carriers made more than $3 billion from change fees in 2019 alone, according to the Bureau of Transportation Statistics. That equated to roughly 2% of major carriers’ overall revenue.

Then the pandemic triggered a steep dropoff in air travel that financially gutted the airline industry, forcing them to bleed millions of dollars a day as planes sit in storage. Getting rid of change fees, airlines hoped, could spur would-be travelers to book flights even if the ever-changing health crisis and local quarantine orders forced travelers to change their plans.
Passengers shouldn’t expect those much-hated fees to disappear forever, several analysts told CNN Business. But it’s possible the pandemic will significantly delay their return and, perhaps, even push airlines to adopt more consumer-friendly fee policies, the analysts said.

Helane Becker, a managing director and research analyst at Cowen, predicts change fees won’t come back for many months, perhaps even years.
The number of travelers screened at US airports is still down more than 70% compared with a year ago, according to TSA data. Becker said she doesn’t think traffic will return to pre-Covid levels for three to five years, and airlines will need to do everything they can to attract customers before then. That includes taking change fees off the table, Becker added.
“They have no choice right now, because people aren’t booking,” Becker said.
The need to draw passengers back on to planes could even prompt airlines to adjust other policies, such as baggage fees, Becker added. Other analysts suggested airlines could permanently loosen their policies, perhaps by offering no-fee reservation changes two weeks or more before takeoff.
Delta, American and United declined to comment.

Why change fees exist and how they could change

The largest US carriers have fined passengers for changing their flight plans for decades. They used to justify the price based on the labor required to change a booking. But the standard change fee has actually climbed to $200 in 2013, even though changing a reservation can now be done at the press of a button, said Harteveldt.
The fees are wildly unpopular fact with customers. Consumer advocates and academics have for years called on federal lawmakers to reign in the prices.
Some critics of the change fees point to Southwest Airlines, which is the only major US carrier that doesn’t impose them. And Southwest is still able to post larger profits than top-tier rivals, such as United and American.
Airlines struggle to bring in more money than they spend for many reasons. But the fact is, change fees can be an important revenue stream for many airlines, said Tom Bacon, a Denver-based consultant focused on boosting airline profitability.
“When you’re operating essentially break-even” change fee revenue is a “pretty big deal”, Bacon said.
Bacon also argues that change fees are justifiable: If passengers make last-minute changes and planes take off with empty seats, the airline misses out on revenue — or what economists call an opportunity cost. 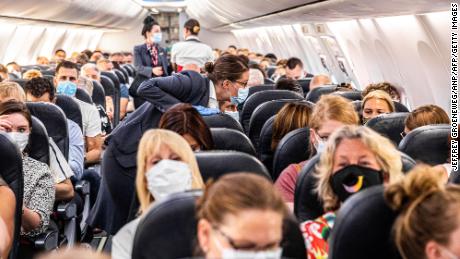 But, it’s hard to make the “opportunity cost” argument if travelers change their plans two weeks or more before takeoff. Airlines, theoretically, would have sufficient time to fill empty seats. So, altering their fee policies to apply only to last-minute changes could be one way that airlines make a consumer-friendly change in a post-Covid era and help draw customers back.
“That’s something a leisure traveler could understand,” he said. “And maybe still motivate someone that has tremendous uncertainty” to book a ticket.

There are no guarantees, of course, that will happen. And four analysts who spoke to CNN Business said change fees will probably never be entirely abandoned.
“It would be a really nice, very consumer-friendly move if airlines took steps to make it make [change fees] more reasonable,” said Henry Harteveldt, the president of Atmosphere Research Group. “Unfortunately, airlines have shown themselves repeatedly to choose policies and tactics that are not consumer-friendly.”
Source: Read Full Article