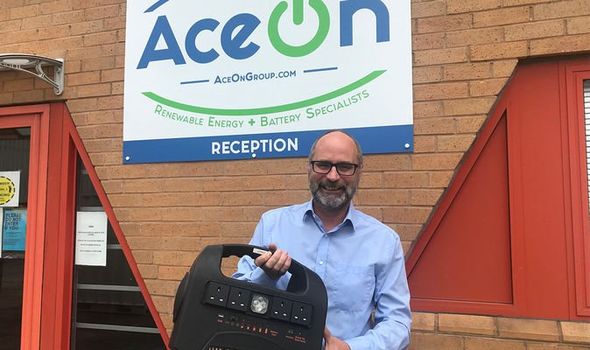 Designed to bring clean, affordable energy to millions, including many of the world’s poorest, the Telford-based firm’s work is supported by a £1m grant from government-backed Innovate UK.

This type of battery has now become the subject of intense focus as the future workhorse of the green energy revolution due to its cheaper properties that are more plentiful than its lithium counterpart and better at weathering extreme temperatures.

Nigeria, crippled by unreliable supplies and soaring prices, has been chosen as the test bed for the two-year project which will see AceOn also collaborating with the University of Wolverhampton, Nigerian power company Nevadic and electronics business DZP Technologies.

“Now is the right time to scale up sodium ion’s potential and help combat climate change,” says AceOn group managing director Mark Thompson, who is forecasting a £10 million turnover in 2023 and has just been appointed an advisor to the Government’s £330 million electrical innovation programme, the Faraday Battery Challenge.

“Sodium-ion is a real step-change in technology and we’re leading the world in adopting it and finding commercial applications for it,” he explains.

“Africa is the start in this fight against climate change and we want to create new green-tech jobs in the UK then roll out this technology to a global market.”

Set up in 2010 by Mark and his father Gerry after 30 years in the battery industry running small businesses, AceOn is now experiencing its “biggest and boldest era to date as environmental concerns grow,” says Thompson.

The workforce numbers 28 with six new jobs created in the past year, while customers are international and demand comes from a broad range of sectors from health and defence to traffic management, housing, sanitation and marine.

We want to create new green-tech jobs in the UK

The company produces its own brand high-performance battery pack solutions of all sizes and applications include the Royal Navy’s polar drones, mobile sheep shearing stations and power devices tracking wildlife.

For the UK there is also Renewergy, a Virtual Power Plant for houses and flats both social sector and private, where AceOn installs solar panels and battery storage, creating micro-generation centres connected to a platform that manages demand, supply and spare energy.

“We need to plan for the 250 million tons of used electric vehicle batteries heading our way,” he warns.

Investment of £600,000 has come so far through bank and Funding Circle loans. Now the business is planning an equity raise of up to £2 million in coming months as it plans to expand its unit, developing its one stop shop solutions centre alongside training centres for new generation installers and engineers.

“We have to be fit for the future,” declares Thompson, “and that’s not for tomorrow’s world, but today’s.”