At perhaps the most defining moment in his life, the most irrepressible player in Major League Baseball had nowhere to go.

After weeks of conjecture, consternation and the occasional haggling over his contractual status, Francisco Lindor’s past sacrifices and future fortunes coalesced all at once Wednesday evening into Thursday morning, a simple phone call from his agent, asking, “Three forty-one – how does that sound?” changing his life forever.

And with that, Lindor became the best-paid shortstop – 10 years, $341 million – in baseball history, the undeniable catalyst of the New York Mets through 2031.

It justified the Mets’ winter acquisition of Lindor from Cleveland, who could not be moved to pay him market value. It showed the trepidation his fiancée felt for New York City had been allayed.

And it marked the end of a long road for this “little kid from Puerto Rico,” as Lindor called himself, who built himself into the eighth overall pick in the 2011 draft into a four-time All-Star and perennial MVP candidate.

Yet life allows no guarantees when and where these defining moments occur.

That’s how Lindor found himself boxed into a hotel room in Arlington, Va., in the middle of a pandemic and on the eve of the Mets’ season opener.

He wanted to jump into his pool – but was thousands of miles from home.

He needed to share the news, but not everyone stays up so late.

His sister – asleep. So, too was fellow Puerto Rican and former Cleveland teammate Roberto Perez.

He did manage to reach his father, the man who drove him to greatness, yet now was beefing with his son over exuberance.

“I called him,” Lindor said Thursday afternoon on a video call with news media, “he was happy, ecstatic and I told him I wanted to scream. And he said, ‘No, no, no, don’t scream, don’t scream.’

"I’m like, ‘Pop, what are you talking about? You know when you drive down the highway and you see the billboard with the Powerball that says $300 million, imagine you getting that right now?  You’re gonna tell me you’re not going to scream?’

So, too do the Mets. 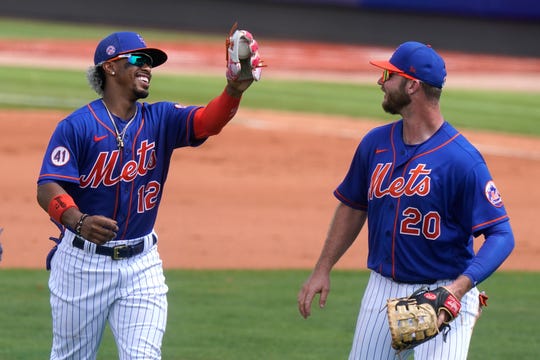