The company, the suit alleges, intentionally sought out young-seeming models for an ad campaign they then sought to run on websites aimed at children — from websites for the children’s television network Nickelodeon, to websites designed to help with schoolwork and homework.

Speaking to reporters Wednesday, Massachusetts Attorney General Maura Healey said the suit stemmed from a nearly year-long investigation into the company.
“Over and over we’ve heard Juul say that it came to market to offer a device that was an alternative to cigarettes, and in fact would even help adults switch and stop smoking,” Healey said. “But our investigation showed that that was not true.” 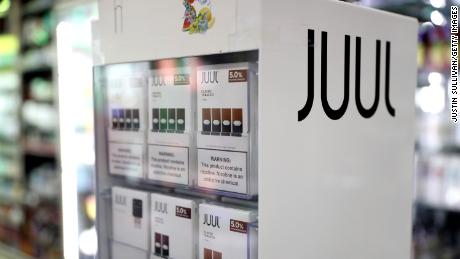 The suit makes Massachusetts the latest state to sue the company for allegedly advertising to children. Illinois filed suit on similar grounds in December. California and New York sued the company in November.
But the Massachusetts suit is the first to cite internal documents discussing the company’s advertising strategy.
Citing internal Juul documents, the suit alleges that the company’s initial 2015 marketing strategy, with the slogan “vaporized,” was based around an appeal to the “cool crowd,” portraying its e-cigarette as a “cool, cutting-edge tech lifestyle product that advances (a user’s) image.”
To that end, according to the suit, Juul devised a campaign in which 10 young-looking models posed casually with the device against brightly colored backgrounds. According to the lawsuit, the internal documents describe the models as “New York trendsetters who embody the Juul brand and speak to millennial consumers.”
The suit goes on to allege that the company intentionally used models that “appeared in photographs to be inappropriately or unsuitably young.”

Furthermore, the state said, “Juul’s employees and its board of directors acknowledged concern that models photographed for the Vaporized Campaign appeared to be too young.” 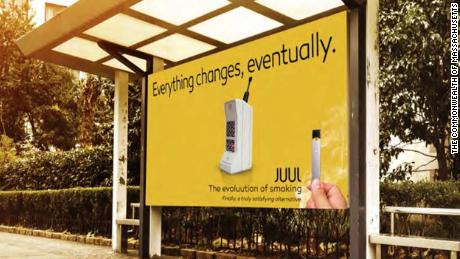 Prior to the Vaporized Campaign, the suit says, Juul had hired a Canadian marketing firm called Cult Collective to recommend a marketing plan. That company, the suit says, developed a campaign in which the sleek Juul device was shown alongside obsolete technologies like a massive cellular phone or a boombox with a tape deck. Along with the tag line, “Everything changes eventually,” the ads called the e-cigarette “the evolution of smoking.”

That plan was rejected, prosecutors said.
On Wednesday, Healey referred to the Cult Collective plan as one that “targeted adult cigarette users and promoted the product as a technology innovation for an older crowd.”
“Just look at some of these photos here today,” Healey said, gesturing to reproductions of the Vaporized Campaign behind her. “look at the people who are using these products. See, this isn’t about getting adults to stop smoking cigarettes, it’s about getting young people to start vaping.”
To that end, the suit alleges Juul purchased banner and video advertising on nick.com and nickjr.com, two websites owned by the children’s television network Nickelodeon, as well as the website for Cartoon Network and Seventeen Magazine. The suit says the company also purchased ad impressions on several websites designed to offer mathematics and social studies help to middle and high school students.
The suit also contends that Juul internal documents show the company also sought to provide celebrities free Juul products to try to recruit them as influencers. Prosecutors said the list of targeted influencers included “celebrities with large numbers of teenage fans,” including Kristen Stewart, Robert Pattinson, Miley Cyrus, Cara Delevigne and Jennifer Lawrence.

The suit further alleges that after the launch, Juul was negligent in its age-checking practices for online sales, sending e-cigarettes to more than 10,000 addresses in the state of Massachusetts between the years 2015 and 2018, without verifying the age of the recipient.
Healey said Wednesday that one in three Massachusetts high school students has used an e-cigarette of one brand or another in the past month.
“This is a public health crisis,” she said. “And today we’re suing the company that started it.”
In a statement shared with CNN on Wednesday, Juul spokesman Austin Finan said that the company had not yet reviewed the complaint. He added, “Our customer base is the world’s 1 billion adult smokers and we do not intend to attract underage users.”

Sign up here to get The Results Are In with Dr. Sanjay Gupta every Tuesday from the CNN Health team.

“We remain focused on resetting the vapor category in the U.S. and earning the trust of society by working cooperatively with attorneys general, regulators, public health officials, and other stakeholders to combat underage use and transition adult smokers from combustible cigarettes,” the statement read.

Finan also noted that the company, which like the vaping industry as a whole is awaiting expected federal regulation, has stopped the sale of flavored vaping devices, halted its advertising, and refrained from lobbying the Trump administration regarding forthcoming federal guidelines.
Massachusetts has some of the toughest vaping regulations in the country.
Source: Read Full Article