London (CNN Business)In the Swiss municipality of Arbedo-Castione, a 70-meter crane stands tall. Six arms protrude from the top, hoisting giant blocks into the sky. But these aren’t building blocks, and the crane isn’t being used for construction.

The steel tower is a giant mechanical energy storage system, designed by American-Swiss startup Energy Vault, that relies on gravity and 35-ton bricks to store and release energy.
When power demand is low, the crane uses surplus electricity from the Swiss grid to raise the bricks and stack them at the top. When power demand rises, the bricks are lowered, releasing kinetic energy back to the grid.

It might sound like a school science project, but this form of energy storage could be vital as the world transitions to clean energy. 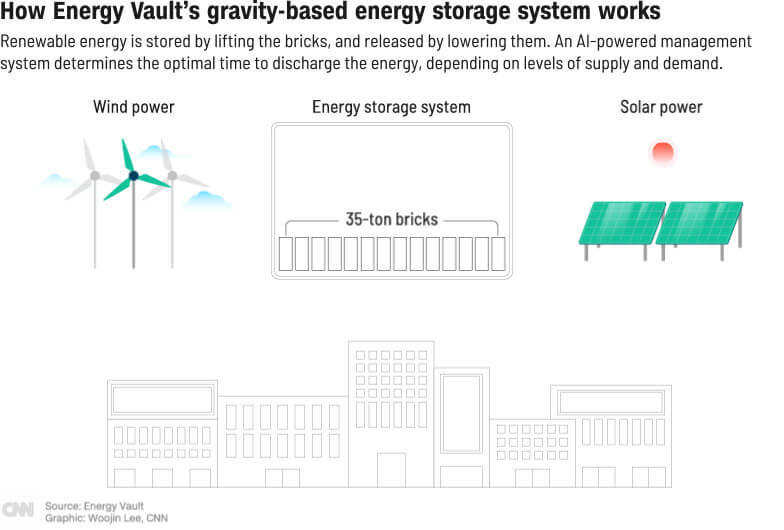 Instead, Energy Vault decided to base its technology on a method developed over 100 years ago, which is widely used to store renewable energy: pumped storage hydropower. During off-peak periods, a turbine pumps water from a reservoir on low ground to one on higher ground, and during periods of peak demand, the water is allowed to flow down through the turbine, generating electrical energy.
Piconi says Energy Vault relies on gravity in the same way, but “instead of using water, we’re using these composite blocks.”
By doing it this way, he says the company is not dependent on topography and doesn’t have to dig out reservoirs or create dams, which can have negative effects on the environment.

Since Energy Vault established its successful prototype in Switzerland in 2020, the company has pivoted from the tower model design, which could reach up to 200 meters in height, to 20-story modular buildings it calls “Energy Vault Resiliency Centers.” Piconi says the company received feedback from potential clients that the tower was “too tall” and might not comply with international building codes. 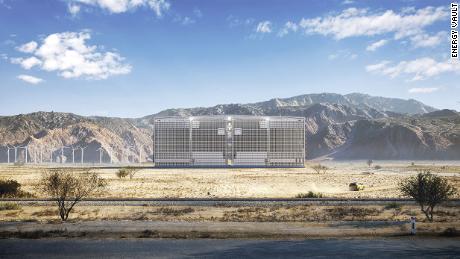 The resiliency centers will use the same bricks, made from soil and waste products, and the buildings will be around 100 meters tall. Bricks will move up and down inside the building on trolleys, controlled by an artificial intelligence system that identifies optimal times for charging or discharging energy, depending on supply and demand.
The centers will vary in footprint, possibly covering between 1.5 and 20 acres depending on the storage capacity, he adds. But they are likely to be installed in places where space isn’t an issue, such as near existing wind or solar plants.
Energy Vault’s technology is “simple and elegant,” says Shreve, but he questions whether the devices can compete with lithium-ion batteries on price.
Even so, the market is hungry for battery alternatives. While other startups — such as UK-based Gravitricity, which drops weights down disused mineshafts — are also exploring gravity-based energy storage, none yet match the scale of Energy Vault.
In February, Energy Vault listed on the New York stock exchange, raising approximately $235 million. It recently announced that actor and environmentalist Leonardo DiCaprio had joined the company’s strategic advisory board.
This year, Energy Vault will start building resiliency centers for DG fuels, which wants a continuous supply of renewable energy to create green hydrogen fuel for the aviation industry. It has also signed deals worth up to $880 million with companies including Saudi Aramco, the world’s largest oil producer, metal smelting company Korea Zinc, and mining giant BHP.

With this backing, Piconi is confident Energy Vault can help to accelerate the energy transition.
So far, customers have signed up to projects that equate to 2.5 gigawatt hours of energy storage — a significant addition to the 17 gigawatt hours of battery storage that Wood Mackenzie estimates is currently in operation in the United States. “In terms of impact, that’s pretty massive,” says Piconi.
Source: Read Full Article